The flag of BolĒvar canton is composed of three vertical stripes, two red stripes symbolizing the valor and force of its inhabitants, and a central green stripe symbolizing the crop potential and the always shining aspiration in the land and the future. In the center are placed three red stars representing the parishes, the central, the urban parish of Calceta and the two other ones the rural parishes of Quiroga and Membrillo.
http://www.gadbolivar.gob.ec/simbolos.html
Canton website
Ivan Sache, 13 September 2018 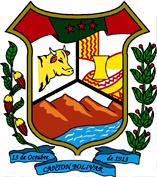