The canton was formed on 29 April 1988.
The flag and the coat of arms are shown as drawings on a PDF document available on the website of the Association of Ecuadorian Municipalities: The lower stripe and upper stripes look blue rather than green on the document (which does not necessary mean that they are actually blue rather than green, since the rendition of the colours on this series of documents is not optimal).
Ivan Sache, 14 October 2008 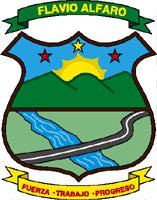