Based on image from <www.pichincha.gov.ec> (defunct).
Falko Schmidt, 29 October 2002

The canton was formed on 23 July 1883. It is named after José Mejía Lequerica Barrotieta (1775-1813), a lawyer born in Quito who brought many ideas  of the French Constitution of 1791 to the new Spanish Constitution. See "A Latin American Spokesman in Napoleonic Spain: José Mejía Lequerica", by Phlip L. Astuto, The Americas, 24:354-377 (1968).
The flag and coat of arms of Mejía are presented on the municipal website.
The flag is horizontally divided yellow-green. "The yellow stripe highlights the soil's resource in the arable lands, where wheat and barley grow abundantly. The green stripe represents the natural landscapes of the canton."
The coat of arms is described as follows: "Upper dexter quarter: Vert, a castle or, representing the canton's capital, surmonted by seven stars of the same symbolizing the seven rural parishes of the canton. Upper sinister canton: Yellow, a cog wheel with 16 cogs proper, representing the industrial potential. A peak and a shovel proper crossed [per saltire], representing the development of mining industry. Lower quarter: Azure, Mount Rumiñahui vert [with a white, snowy top]. In dexter lower part, a grain sheaf representing agriculture. In sinister lower part, a cow sable representing cattle breeding. The whole over a wavy stripe blue and argent representing the thermal and bathing waters."
The capital of the canton is the town of Machichi, while the seven rural parishes are Alóag, Aloasí, El Chaupí, Cutuglahua, Tambillo, Uyumbicho and Manuel Cornero Astorga (Tandapi).
The flag can be seen behind the Mayor on a photograph available on the municipal website.
Ivan Sache, 20 October 2008 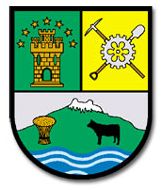