Based on image from <www.pichincha.gov.ec> (defunct).
Falko Schmidt, 29 October 2002

The canton was formed on 26 September 1911.
The flag is presented on the municipal website: "The flag is made of three equal horizontal stripes with the colours blue, red and green, from top to bottom. The four white stars placed on the red stripe for three of them and on the blue stripe for the last one, represent the canton's capital and the rural parishes."
However, the drawing of the flag shown beside the text has five stars, four in the red stripe and the fifth in the blue stripe. The canton's capital is Tabacundo, while the rural parishes are Tupigachi, La Esperanza, Tocachi and Malchinguí.
Previously, there were probably only four rural parishes and the flag had only four stars; the image was corrected but the description was not.
Ivan Sache, 20 October 2008 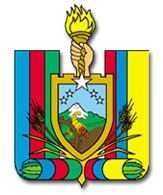