National flag with two white crossed sabres in canton.
It seems that this flag is always shown in sources with escutcheon coloured, whether that is due to some internal armed forces regulations following the standard more rigorously, or if it is result that these flags are produced by one and the same manufacturer.
Željko Heimer, 21 July 2001 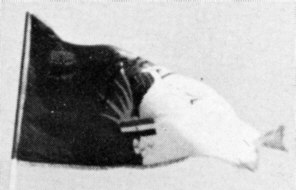 This photo shows an Egyptian military colour hoisted on a modified T-62 tank. The photo was taken in the 1970ies, probably. The flag is a vertical bicolour (dark-white), showing the Egyptian arms in the canton and the national flag on a sun-like device in the center.
Source: Kampf-Magazin 4. Eshel (Cologne), 1981. p. 14.
Marcus E.V. Schmöger, 25 November 2006

I saw in Cairo an Egyptian Air Force flag, Royal Air Force blue with the national flag in the canton, 1/3 the hoist, and with the roundel centred in the fly.
Graham Bartram, 29 June 2000

image located by Esteban Rivera, 6 March 2016
based on Wikipedia

The Air Defence Force flag is pale green with the national flag in the canton, 1/3 the hoist, and with the Force badge centred in the fly.
Joe McMillan, 11 January 2001

The badge is not described, but I think that what is shown on the Egyptian Government website is that badge.
Željko Heimer, 21 July 2001

The Egyptian Air Defense Forces or EADF or EADC (Arabic: قوات الدفاع الجوي‎, Quwwat El-Difa' El-Gawwi), is the Anti-aircraft warfare branch of the Egyptian Armed Forces. Responsible for protecting the Egyptian airspace against any hostile air attacks. Forces established in accordance with the Presidential Decree issued on February 1, 1968, which provided for the establishment of the Air Defense Forces as a branch of a major third of the armed forces next to Navy a fourth next to the Army, Air force, formerly part of the artillery and under the operation command of the Air Force.
Source: https://en.wikipedia.org/wiki/Egyptian_Air_Defense_Forces Second row, from RIGHT to left:
11. Flag of the Air Forces
12. Flag of the Air Defense Forces
13. unidentified, possibly the jack/naval ensign
14., 15., 16. unidentified
17. Regimental color of the Border Guards (the red/black/green strip is part of their distinctive badge. During the monarchy, they used a tricolor of these colors as a flag)
18. - 20. flags of the military districts/zones, but I don't know which is which.

Third row, from RIGHT to left:
21. - 23. flags of the military districts/zones, but I don't know which is which
24. Staff College flag
25. Paratroopers Regimental Flag
26. Special Forces/Rangers "Sa'aqa" Regimental Flag
27. Republican Guard Regimental Flag, same as #4, but (not shown in this image) two 'honors',written in gold on white rectangles at the hoist and fly ends of the black stripe "Palestine 1948" and "Sinai 6 October 1973"
28. Military Hospitals (red crescent flag)
29. unidentified (a regimental flag of some sort)
30. Military Academy

Fourth row, from RIGHT to left:
31. Military Technical College
32. Naval Academy
33. Air Force Academy
34. Air Defense Academy
35. Reserve Officers
36. Unidentified
37. Artillery regimental flag, not sure about the design except for the stylized 'grenade' in the red stripe is the badge of the artillery corps
38. some sort of Air Force regimental flag
39. another regimental flag
40. unidentified