Description of the flags

Luxor was separated administratively from Qena and adopted its flag own before 2003. It is a very complicated design, white with an emblem in the center showing buildings and sphinxes.
Jaume Ollé, 23 February 2007

Aspect ratios of the flags: 2003: 3: 4, otherwise 2: 3
The symbolism of the youngest Egyptian governorate, Luxor, is complex. As a city in the governorate of Qina, Luxor used the flag and coat of arms that became its symbols when the governorate was founded. The flag shows the Temple of Karnak with the famous Sphinx avenue. Above it hovers the golden death mask of Tutankhamen (18th Dynasty, reign 1332-1323 BCE) found in an intact grave in the Valley of the Kings. Above the death mask is the city name, above in Arabic script, below in Latin script.
Ian MacDonald, 21 February 2021

The depiction of the death mask remained the central component of the later redesign of the flag and coat of arms of the Luxor Governorate. There were also variants of the city and first governorate flags in which the depiction described above was only placed as an emblem in the middle of a white flag cloth.

As a former part of the Qina Governorate, the flag of Qina was also used in the time after the Luxor Governorate was founded.
Ian MacDonald, 21 February 2021 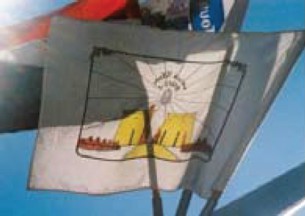 The attentive observer will notice that the boat flag appears to be shown the wrong way round. The flagpole is clearly to the right of the flag, so normally the reverse side would have to be shown. However, from the inscription above the death mask, you can see that the word Luxor (in Latin letters) can be read correctly, i.e. the front of the flag can be seen. It should be noted, however, that the Arabic script is read from right to left and so images are also viewed in the Arabic language area. In domestic flag and flag usage, the side facing left from the flagpole or flagpole is the front of the flag. Most of the Arab states have adapted themselves to international flag usage. In older flag books, however, the images of Arab flags can be seen with the mast shown to the right of the flag and the flag itself waving to the left.
Ian MacDonald, 21 February 2021

The city and first governorate coats of arms show a boat floating on the Nile, on it the famous obelisk of Luxor and the death mask of Tutankhamen.
Ian MacDonald, 21 February 2021

On November 2nd, 2010 the governorate was given a coat of arms, which only shows the death mask (eg-g-lux4.gif). In 2016, a new, light blue flag with this coat of arms in the center was introduced.
Ian MacDonald, 21 February 2021