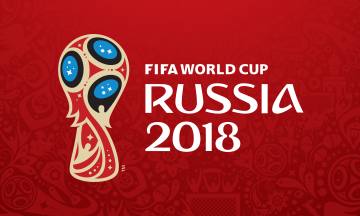 Following the selection of the 2006 World Cup hosts, FIFA had decided on a policy for determining the hosts of future editions. The six world confederations — roughly corresponding to continents – would rotate in their turn of providing bids, for a specific edition, from within their member national associations. This system was used only for the selection of the 2010 (South Africa) and 2014 World Cup (Brazil) hosts, open only to CAF and CONMEBOL members, respectively. In September 2007, the rotation system came under review, and a new system was proposed which renders ineligible for bidding only the last two World Cup host confederations. This proposal was adopted on October 29, 2007, in Zürich, Switzerland by FIFA's Executive Committee. Under this policy, a 2018 bid could have come from CONCACAF, AFC, UEFA, or OFC, as Africa and South America were ineligible. Likewise, no CONMEBOL member could make a 2022 bid, and candidates from the same confederation as the successful 2018 applicant would be disregarded in the 2022 selection procedure. Hence, in October 2007, FIFA ended its continental rotation policy. Instead countries that are members of the same confederation as either of the last two tournament hosts are ineligible, leaving Africa ineligible for 2018 and South America ineligible for both 2018 and 2022.

The bidding process for the 2018 and 2022 FIFA World Cups was the process by which FIFA, through its "FIFA Evaluation Group for the 2018 and 2022 FIFA World Cup™ bids" selected locations for the 2018 and 2022 FIFA World Cups. The process began officially in March 2009, the 16th being the deadline to submit the complete bid registration form, although two previous deadlines were already in place, one was January 15, 2009 to request for applications and the other was February 2, 2009 to register; eleven bids from thirteen countries were received, including one which was withdrawn and one that was rejected before FIFA's executive committee voted in November 2010. In October 2010, Russia formally pulled out of the race to host the 2022 FIFA World Cup. Two of the remaining nine bids applied only to the 2022 World Cup, while the rest were initially applications for both. Over the course of the bidding, all non-European bids for the 2018 event were withdrawn, resulting in the exclusion of all European bids from consideration for the 2022 edition. By the time of the decision, bids for the 2018 World Cup included England, Russia, a joint bid from Belgium and Netherlands, and a joint bid from Portugal and Spain. Bids for the 2022 World Cup came from Australia, Japan, Qatar, South Korea, and the United States. Indonesia's bid was disqualified due to lack of governmental support, and Mexico withdrew its bid for financial reasons.

The twenty-two member FIFA Executive Committee convened in Zürich on December 2, 2010 to vote to select the hosts of both tournaments, hence announcing Russia to host the 2018 FIFA World Cup and Qatar to host the 2022 FIFA World Cup. The United States, the last non-European candidate in the 2018 bidding cycle, withdrew its bid for that year; hence the 2018 tournament would have to be held in Europe. This in turn meant that CONMEBOL and UEFA were ineligible for 2022. The autonomous non-commercial organization 2018 FIFA World Cup Russia Organising Committee (dubbed Local Organizing Committee, LOC) was created by the Decree of the Government of the Russian Federation 17 January, 2011. The 2018 FIFA World Cup was held from June 14, to July 15, 2018.
Esteban Rivera, 04 February 2022 For branding (Emblem or logo, and typeface), Brandia Central a brand consulting agency based in Lisbon, Portugal headed by Rui Trigo and Miguel Viana, following a creative pitch involving eight Russian and International design agencies. The selection of the final design proposal for the Official Emblem was made by a judging panel composed of ten high-profile members from diverse backgrounds, comprising Vitaly Mutkó (Chairman of the organizing committee), Jerome Valcke and experts from the worlds of sport, culture and government in Russia, namely Igor Shuvalov, Alexey Sorokin, Fabio Capello, Igor Akinfeev, Oleg Dobrodeev, Denis Matsuev, Valery Gergiev and Chulpan Khamatova. The same agency created all the accompanying materials in 2014 (Official Look programme), 2015 (Official Slogan) and 2016 (Official Poster and Official Mascot) as well as a typeface called "Dusha" (from ????, Russian for 'soul'). Dusha’s graphics are based on two typographic styles with a very distant, if any, connection to Russia — Carolingian minuscule and Uncial, designed by Brandia Central Christoph Koeberlin and edited by Adotbelow of the DSType Foundry (Dino dos Santos) in Portugal. This typeface is used in the logo featured on the flag. The flag's color background, red, most likely resembles the color background of the host country's flag, Russia. The logo was officially unveiled on October 28, 2014 by Cosmonauts at the International Space Station and on Earth at the Bolshoi Theater in Moscow the very same day. The logo was inspired by Russia's rich artistic tradition and its history of bold achievement and innovation. The shape of FIFA 2018 logo has an outline of the World Cup trophy. The design consists of the most dramatic use of red, blue and gold colors which symbolize the “Age-old Art Techniques” from Russia.
Sources: https://fifaliveupdates.com/new-fifa-2018-logo-and-emblem/ and https://en.wikipedia.org/wiki/2018_FIFA_World_Cup 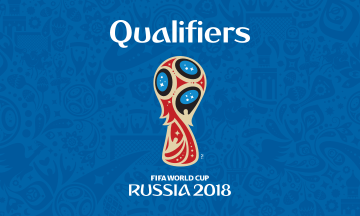 There was a special flag used during the qualification stage for this tournament. It is dark blue in background with the cup logo in full color in the middle. Above the cup logo is "Qualifiers" and below reads "FIFA World Cup Russia 2018". The text was in the same font described by Esteban and it is in white in color.
Zachary Harden, 21 June 2018