Eureka was a TV series about the fictional town of the same name.
Valentin Poposki, 9 March 2012 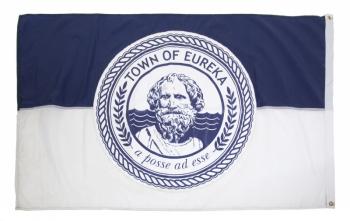 image from Juliens Live, resized and cleaned up by António Martins-Tuválkin, 12 March 2012

It is a ~2:3 (Old Glory) blue over white horizontal bicolor with a large centered white disc filled with what looks like the town seal, also in (Old Glory) blue and white. The town seal shows the likeness of Archimedes (a canting element) against a backdrop of stylized blue waves and white sky; on the seal rim the words "Town of Eureka" across the top, set in sans serif grotesk capitals, and "a posse ad esse" (latin for "from possibility to being") along the bottom, set in script cursive letters, separated by two laurel branches; the whole encircled in thick ropework.

The actual flag, as shown for auction, has the seal sewn in slightly rotated, about three degrees clockwise, and with its shade of blue slightly off.
António Martins-Tuválkin, 12 March 2012

You'd think the motto would be in Greek at least.
Marc Pasquin, 11 March 2012