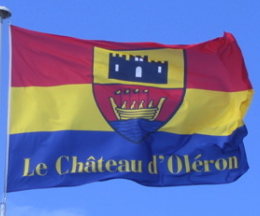 The municipality of Le Château-d'Oléron (3,949 inhabitants in 2007; 1,567 ha) is located on the south-eastern coast of the island of Oléron.

Remains of Mousterian settlements (4th-3rd millenium BC) have been found near the village of Ors, on the municipal territory of Le Château-d'Oléron; the Ors dolmen is sometimes considered as the second biggest in France.
The Roman colonization of the area is evidenced by coins and tombs, as well as by remains of a paved way and of a port basin; the tower built on the rocky spur dominating the village, as shown on a seal from the 13th century, is probably of Roman origin.
In the middle of the 5th century, the Romans were superseded by the Visigoths. Around 470, Sidonius Apollinaris, Bishop of Clermont- Ferrrand, wrote a letter to the Visigoth officer posted at Oléron to command a fleet watching the Saxon pirates scouring the Atlantic coast. Medieval chronicles report that the St. Mary church at Le Château-d'Oléron was subsequently fortified because of the Normand raids. The Normands seem to have established on the site a withdrawal base, from which they were expelled by Duke of Aquitaine Taillefer; the duke built a castle (in French, château), most probably beside the old Roman tower - the medieval texts all mention both the castle and the tower.

In the 12th-14th centuries, different laws were edicted at Oléron. The whole island was granted in the 12th century a municipal chart, the capital of the municipality being set up at Le Château-d'Oléron. The original of the chart, modelled on the Institutions granted to the town of Rouen, has been lost, but a copy made in Oléron has been preserved.
The Laws of Oléron (12th century) are presented in the History of Law website as follows:

The Consolato del Mare inspired the second great code of maritime regulation, the Laws of Oléron, which are supposed to have been compiled about A.D. 1150. It is generally understood that we owe them to a woman, Eleanor, Duchess of Guienne, Queen first of Louis VII of France, who procured a divorce from her, and afterwards of Henry II of England, the first of the Plantagenets. The statement is, that, when she was in the East whither she accompanied her first husband, the King of France, on the Second Crusade, she became acquainted with the Consolato del Mare, which was then dominant in the Levant, and being struck with its adaptability for use by the people of her own Duchy of Guienne, who were largely engaged in the Atlantic coast trade at the time, caused it to be recast and enlarged, and promulgated in the little island of Oléron, off the coast of Guienne, then the centre of the commerce of Southwestern France. It was soon adopted both in France and England under the title of the Laws of Oléron, by which name the compilation is known to this day. It is said to have been introduced into England either by Eleanor herself or by her son Richard Cœur de Lion. With more or less modification it is the maritime law of the civilized world today. If Eleanor of Guienne inspired or compiled the Laws of Oléron, or caused them to be compiled, it is greatly more to her credit than anything else history tells us in regard to her. But she is more likely to have been instrumental in the performance of the work than her utterly worthless and profligate son, Richard.

The Oléron Customs, written in the 13th-14th centuries in local language, updated an older code prescribing the customs, uses and institutions of the island.

During the Wars of Religions, the strategic port of Le Château-d'Oléron was fiercely disputed between the Protestants and the Catholics. The fighting that took place in 1586 in the town was related by the Protestant writer and warlord Agrippa d'Aubigné; peace was reestablished in 1625, a few years before the seizure of La Rochelle by the Royal troops (1628).
In 1627, Louis XIII and Cardinal Richelieu, visiting the place, decided to fortify it. Pierre de Conty, lord of la Mothe d'Argencourt, was commissioned to build a fortress on the eastern slope of the rocky spur, superseding the old fort buit by the Dukes of Aquitaine. Nicolas Vardin, Knight of Clerville, appointed governor of the citadel in 1673, increased the fortifications, adding a complex system of collection, supply and release of rain water. At the end of the 17th century, Sébastien le Prestre, lord of Vauban, completely revamped in 1677-1691 the citadel à la Vauban, adding a demilune, ditches, covered passages, protection glacis and a wall enclosing the village.
Never attacked from the sea, the citadel was nearly completely destroyed by air raids in 1945.

The arms of Le Château-d'Oléron are "Per fess, 1. Or a castle sable port and windows argent, 2. Gules on a sea azure a nave with four seamen each raising a banner, all or".
These arms are, undoubtedly, based on the old municipal seal of Oléron, that shows the ship with the four flag-bearing seamen and a tower in the background. This seal, shown on the Belle Saintonge website, could be the seal from the 13th century introduced above in the historical presentation of the municipality.