The castle of Haut-Koenigsbourg (website; photos) is located in the geographical center of Alsace, 20 km west of Sélestat.
Erected on a sandstone spur (757 m a.s.l.), the castle offers a unique, 360 degree panoramic view on the plain of Alsace, the Vosges and Black Forest (Germany) mountains. Haut-Koenigsbourg, a medieval fortress reconstructed as it was in the beginning of the 20th century, is the most visited monument in Alsace, welcoming every year more than 500,000 visitors. The pink silhouette of the castle emerging from the mist early in the morning is among the most emblematic images of Alsace.

Haut-Koenigsbourg was first mentioned in 1147 as Castrum Estuphin, a fortress built by the Hohenstaufen. Primarily used to watch the wheat and wine road, which connected Italy to the Low Countries, and the salt and silver road, which connected Lorraine to Germany, the castle could also be used, in case of need, as a safe place of withdrawal. The name of Koenigsburg (Royal Fortress) was coined in 1157.
Partially destroyed in 1462 during a siege, the castle was offered in 1479 by the Habsburg to the Tierstein, a lineage from Swiss Jura, as a reward for their loyalty. The new owners increased the fortifications to resist artillery attacks. The castle was transferred in 1533 to the Sickingen, which transformed it into the most modern fortress in Alsace, soon renamed to Hohkoenigsburg (Upper Royal Fort).
The impressive fortification was, however, seized during the Thirty Year's War; after a 52 day artillery siege, the Swedes looted and burned it to ashes in September 1633.

Ruined and soon colonized by an exuberant vegetation, Haut-Koenigsbourg was abandoned for the next two centuries. The ruins, deemed haunted, repelled the local population. In the middle of the 19th century, historians renewed the general public's interest for the Middle Ages, formerly considered as an age of darkness; in the same time, the Romantic writers popularized the concept of "wild nature", including ruins reconquered by vegetation. Accordingly, Haut-Koenigsbourg soon attracted several excursionists.
Registered as an historical monument in 1862, the ruins were acquired in 1865 by the town of Sélestat, which consolidated them and commissioned the architect Winkler to reconstruct the castle.

Incorporated on 1871 to Germany and lacking the funds required to restore the castle, the town offered in 1899 the ruins of Haut-Koenigsbourg to Emperor Wilhelm II (1859-1941). Fond of medieval history and chivalric orders, the emperor immediately expressed sheer interests for the site, and ordered the complete reconstruction of the castle as it was in the 15th-16th centuries.
The emperor did not intend to let build another private residence - he never slept in Haut-Koenigsbourg - but a symbol of his empire, as the continuation of the old Holy Roman Empire. Conveniently located on the western border of the empire, the castle was the symbolic twin of the Teutonic fortress of Marienburg (today, Malbork, Poland), located on the eastern border of the empire.

The architect and historian Bodo Ebhardt (1865-1945) was commissioned to reconstruct the castle as it was in the late Middle Ages. The most advanced techniques of the time were used. The steam locomotive "Hilda" transported the stones from the Oedenburg quarry, which had been designed only hundred meters from the building site. The mechanic cranes required to lift the stones were soon electrified. Started in 1901, the reconstruction of Hohkoenigsburg was achieved within seven years.
The castle was inaugurated on 13 May 1908 in the presence of Wilhelm II; the taken over of the castle by the Sickingen in 1533 was re-enacted by 500 actors.
In spite of having founded his reconstruction on the scientific knowledge of the time, comprehensive search in historical archives and comparisons with less ruined fortresses, Ebhardt was bitterly criticized. His main rival, the medievalist Otto Piper, whose reconstruction project had been turned down by the Emperor, called him an opportunist and accused him to have definitively altered an historical site. The square shape of the keep was also so original that Ebhardt's fiercest opponents fabricated evidence of a round structure.
Alsatian activists supporting the return to France, led by the illustrator Hansi (1873-1951), mocked the reconstruction, especially the inauguration parade held under rain.

After the First World War and the reincorporation of Alsace to France, the castle became a state property, with the status of national palace. First considered with reluctance as a symbol of the German hereditary enemy, Haut-Koenigsbourg progressively gained recognition when the French-German relationships were normalized after the Second World War.
Eventually registered as an historical monument in 1993, the castle was acquired in 2007 by the department of Bas-Rhin.

The emblematic site and architecture of Haut-Koenigsbourg attracted several movie directors. The most famous scene of La grande illusion, featuring Erich von Stroheim (as Commandant Von Rauffenstein) and Pierre Fresnay (as Captain De Boeldieu), was shot inside the castle by Jean Renoir (1894-1979) in 1937.
Following a visit to Haut-Koenigsbourg in the 1980s, the Canadian illustrator John Howe (b. 1957) modeled the Minas Tirith fortress on the Alsatian castle in the re-illustrated edition of J.R.R Tolkien's Lord of the Rings (1996/2003). Hired by Peter Jackson as chief conceptual designer for the trilogy The Lord of the Rings (2001/2003), Howe incorporated elements of Haut-Koenigsbourg in the movies' scenery.
Hayao Mizayaki modeled Howl's Moving Castle (2004) on the Haut-Koenigsbourg and traditional architectural elements spotted in the towns of Colmar and Riquewihr.

Emperor Wilhelm II made of Hohkoenigsburg a museum of German medieval history, open to visit as soon as 1904, four years before the achievement of the restoration. To secure the historical reconstitution, he created the same year the Hohkoenigsburg Society (Hohkönigsburgverein). Composed of noted university professors, architects and archeologists, the society organized the acquisition of hundred of Rhenish medieval weapons and pieces of furniture and initiated the promotion of the site to the general public.
The Alsatian medievalist painter Leo Schnug (1878-1933), commissioned to design the costumes used during the controversial inauguration parade, was subsequently hired to paint the walls of the main halls of the castle. He decorated the walls of the Kaiser's Hall with historical paintings, genealogical trees and coat of arms, a huge double-headed eagle covering the ceiling included, glorifying the German feudal lineages.
Several banners of arms hang from metallic poles inserted horizontally in the lateral walls (photo, photo). The right banner features a shield argent charged with a double-headed eagle sable armed and langued gules nimbed or inescutcheon gules a fess argent, surmounted by the crown of the Holy Roman Empire.
These are the arms of the Holy Empire with the Habsburg arms. The scroll inscribed "Imperatori Friderico Caesari et Augusto" must refer to Frederick III (1415-1493), the first emperor (1452-1493) from the House of Habsburg. 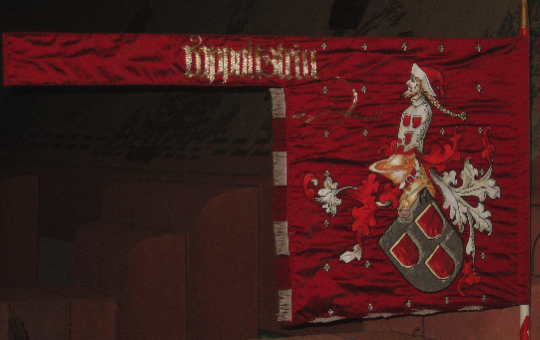 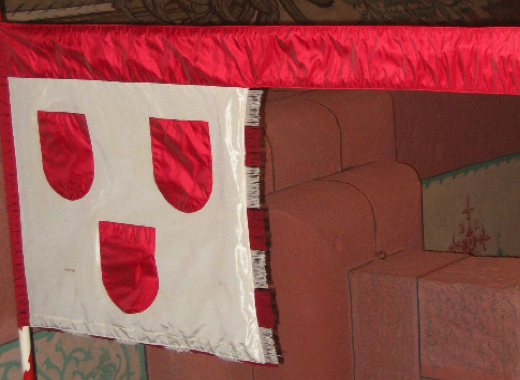 The two banners feature a shield argent charged with three escutcheons gules.
The caption reads "Rappolstein", in French, Ribeaupierre, an old noble Alsatian lineage established in Ribeauvillé (Rappoltsweiler). Both the town and the domain were named for its founder, Raibeau / Rappolt. The town is overlooked by the picturesque ruins of the castles of Girsberg, Saint Ulrich / Lower Ribeaupierre, and Upper Ribeaupierre. The oldest known lord of Ribeaupierre (12th century) is Egenulf of Urselingen, of Swabian origin. A local legend claims that the lords of Ribeaupierre came from Spoleto, without any evidence.
John I of Ribeaupierre married around 1310 Adelaide, the younger daughter of Duke of Lorraine Theudebald II. Schmasmann I, aka Maximin (d. 1450) was appointed Protector of the Council of Basel by Emperor Sigismund; he was among the pretenders of marriage with Catherine of Burgundy, widow of Duke of Austria Leopold the Handsome. His son, William I the Great (d. 1507) commanded René II's cavalry during the siege of Nancy in 1477 that ended with the death of Duke of Burgundy Charles the Bold. His son William II (1468-1547) was created Marshal of the Court and First Magistrate of Austria by Maximilian I; he subsequently served Charles V, who erected him Knight of the Order of the Golden Fleece in 1515 in the aftermath of the Peasants' War, and Ferdinand I. Egenulf III introduced the Lutheran religion to Ribeauvillé on 18 April 1563.
[E. Meaume. 1875. Les seigneurs de Ribeaupierre, famille de la chevalerie lorraine, en Alsace et en Suisse. Mémoires de la Société d'Archéologie lorraine et du Musée historique lorrain 3:1, 302-329]

The arms of Ribeaupierre appear, as an escutcheon, on the arms of Egenulf featured on a guldentaler minted in 1564 in Zurich by Jakob Stampfer, now kept in the Coinage cabinet of Baden in Karlsruhe.
[NumisAlsace]

Ribeauvillé already used the arms of Ribeaupierre on its seal in the 14th century. In 1615, the emblem of the town messenger and the seals of the town and of the court featured the same arms with a hand proper clad azure in the center. These arms are shown in the Armorial Général (image). The hand was interpreted, without evidence, either as the blessing hand of the bishop of Basel, suzerain of Ribeauvillé, or a hand of justice.
[Ribeauvillé municipal website] 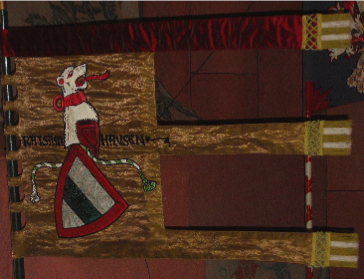 The caption reads Rathsamhausen, for an old noble Alsatian family, owner of the castle of the same name in Ottrot, located 50 m away from the castle of Lutzenbourg. In 1393, the Rathsamhausen-Ehenweier family reunited the two castles, once fierce enemies. The two castles were ruined by the Swedes during the Thirty Years' War.
The arms of he Rathsamhausen were "Argent a fess vert a bordure gules".BR> [JDS - Journal des Sorties] 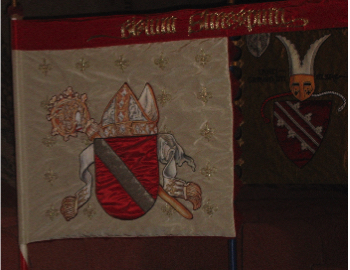 On the left flag, the caption reads "Österreich", Austria. 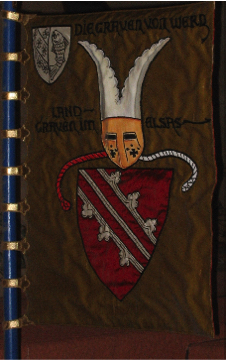 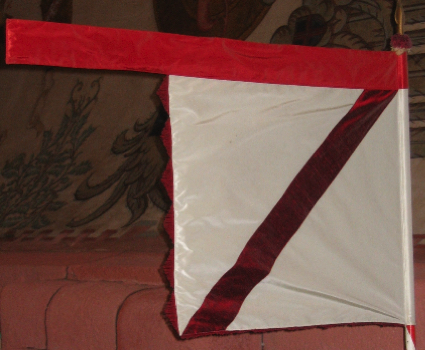 On the left flag, the caption reads "Die Graven von Werd" "Landgraven im Elsas".
The County of Werd was located south of Strasbourg (today, Matzenheim). The oldest known Count of Werd is Sigebert IV (1189), the son of Duke of Alsace Sigebert III; he was erected Landgrave of Alsace in 1200. The last Count of Werd, Louis X, sold the domain in 1359 to the Bishop of Strasbourg.
The red shield is a representation of the arms of Lower Alsace.

The right flag is a square banner of the arms of Strasbourg, "Argent a bend gules".