The municipality of Cavalaire-sur-Mer (6,975 inhabitants in 2011; 1,674 ha; municipal website) is located on the Mediterranean Sea, 20 km south-west of Saint-Tropez.

Cavalaire was already settled by the Ligures, who established in the 6th century BP the oppidum of Montjean, located 460 m above the sea level. The village was mentioned on the Antonine Itinerary (3rd century) as Caccabaria.
In the Middle Ages, Cavalairo / Cavalaira belonged to Jean de Cossa, Baron of Grimaud. Then the safest natural harbour in the region, Cavalaire developed as a significant fishing and commerce port in the 14th-15th centuries. This Gilded Age ended in 1470 when Genoese seamen established the port of Saint-Tropez.

After the French Revolution, Cavalaire was made a hamlet (écart) of the municipality of Gassin.
In the late 19th century, the village welcomed the first tourists. Pierre Foncin (1841-1916), geographer and co-founder of Alliance Française, purchased in 1890 a domain, where he built in 1894 a vacation house called Casteu dou Souleu (in Provencal, Sun's Castle). The "White House", used as a seamark by sailors, was shown on the navigation maps of the time. In 1975, Pierre Foncin's daughter, Mireille (d. 1999), donated the domain to the Conservatoire du Littoral (Coastal protection agency). The manor is surrounded by a botanical garden and a forest of holly oaks, still exploited for cork.
Due to the increase of its population, Cavalaire asked for municipal status, which was obtained in 1929; the first Municipal Council gathered on 26 October 1929. On 7 November 1929, the Municipal Council unanimously approved the change of the name of the municipality to Cavalaire-sur-Mer, for the sake of differentiation from Cavalière (La Lavandou). The same year, the famous American tennis player Bill Tilden played against Jean Borotra and Jean Brugnon at Hôtel des Bains. Cavalaire was registered as a tourist's resort by the Guide Michelin in 1930.

Cavalaire was officially granted the title of Sea Resort (station balnéaire) in 1956. The town has four sandy beaches (Downtown, Parc, Pardigon, Bonporteau) stretching over 4 km, and a modern marina (Port Cavalaire), with 1,251 moorings.

The flag of Cavalaire, as hoisted on the tourist bureau, is white with the municipal coat of arms. The writing "CAVALAIRE" / "HÔTEL DE VILLE" (Town Hall) is added beneath the coat of arms. "CAVALAIRE" is written in big blue letters, while "HÔTEL DE VILLE" is written on the line below, in small, light blue letters (hardly legible), flanked by two horizontal lines.
A former version of the flag (photo) lacked the writing.

The arms of Cavalaire are "Gules a sun or issuant from chief dexter a Roman nave of the same on waves azure in sinister canton a partridge or. The shield surmounted by a mural crown. Beneath the shield a scroll argent inscribed with "HERACLEA / CACABARIA / CAVALAIRE". 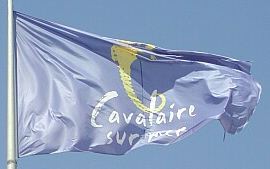 Flags hoisted over the tourist bureau of Cavalaire - Images by Ivan Sache and photo by Dominique Cureau, respectively, 25 May 2014

Beside the aforementioned municipal flag, the tourist bureau of Cavalaire flew another two flags related to the town (photo):
- a flag vertically divided blue-red, the colors being taken from the municipal arms.
- a purple flag charged with a yellow sea-horse and the name of the town in white letters. A sea-horse is in French a cheval de mer therefore the use of the fish as the symbol of the town might be related to the homophony between cheval and caval(aire). This flag was no longer flown in spring 2018.