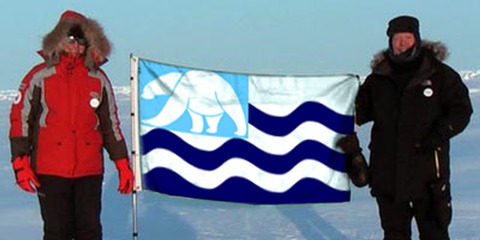 The Determined Independent New Governance of the British Arctic Territory (DINGBAT) is a political group which seeks to change the current status of the territory to that of a fully sovereign entity while remaining part of the Commonwealth (and incidentally joining MERCOSUR for reasons best left unsaid....).

DINGBAT recently unveiled a flag they would like to see used by an independent BAT, a picture of one flying can be seen here at a meeting of the whole membership of DINGBAT: http://img16.imageshack.us/img16/1086/batsovereignty.jpg
Marc Pasquin, 1 April 2013

I can verify the existence of DINGBAT. For the record, there are 3 members. Two of them are in the flag photo while the third guy is taking the picture. I can also verify that tradition says that the word "Nunakluik" roughly translates as "land of the frozen pee", not "peas".
Clay Moss, 1 April 2013