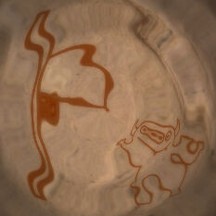 I discovered this article in the latest edition of the Weekly Brr News, a division of the BAT Monthly Register, about the discovery of what is thought to be evidence of an ancient flag and flag pole on a wall of a tidal cave on the coast of the British Arctic Territory. The story was written by staff reporter and owner, Frank Lee Fallible. The article reports that local diver and amateur marine archaeologist Ivan P. Freely made the intriguing discovery. Ivan P. Freely should not to be confused with his late father Fire Captain I.P. Freely who died in 1918 (ref.)

It should also be noted that the underwater caves were named for yet another member of the family, Ulysses P, who according local legends accidentally discovered them in 1898 after slipping and falling into the water while returning home from evening of pub hops. It was his habit on these occasions to take a quick break along the cliffs above the caves. They were destined to forever bear his name - the U.P. Freely Underwater Caves - because of his fatal mishap. The caves located just the north of the popular British Arctic Territory coastal vacation and resort town of Brr, are today a popular tourist stop because of their unusual yellowish rocks and waters.

The photographic evidence brought back by the expedition indicates that perhaps flag and poles were in use by local inhabitants of the area much earlier than previously believed. I.P.s discovery has staggered the local scientific academic community and generated a heated debate amongst them, at least for those attending their weekly meetings held at the Polar Bear Bar and Grill.

“I believe this underwater rock drawing, or pictograph, is of a ceremonial pole and flag used in early pagan celebrations or rituals,” he explained. This statement generated several questioning comments from others in the group of attending notable local academics and researchers.

“Are you sure it isn’t just somebody drying their laundry?” one commented.

“The figure on the right looks like it might be my great, great grandfather,” another local offered.

“I’m not really sure, but now that you mention it, it does sort of look like him,” I.P. freely acknowledged.

“How about as soon as I can dry out my equipment and myself, I go back and see if I can find the cave again,” I.P. hesitantly added before nodding off.

With that, the rest of the prestigious assembly began debating if the Brr City Football Club (BCFC) had a chance to play in the annual BATFA Championship this year... at least, if they could get the snow removed in time for a summer season and find another team to play them. This particular ice cave drawing with its perfectly symmetrical image of the "Horned Man" was the very first discovered cave drawing that led to all of the mid 20th Century theories about ancient aliens coming to Earth. No ancient person would have possessed the ability to draw the man, and so, it is obvious it was drawn by one of them thar space aliens. The early Ellesmeres probably drew the pole and flag, which of course leads to many other questions.....
Clay Moss, 1 April 2021