Berkshire's flag was registered on February 27, 2017, following declarations of support from twenty-four local organisations, backed by the Lord Lieutenant of Berkshire, James Puxley. The flag features the traditional hart (stag) and oak theme associated with the county for several centuries, which appears on the badges, emblems and logos of a large number of county organisations.
The hart and oak refer generally to the forest lands of Berkshire and specifically to the legend of a late 14th century royal huntsman named Herne the Hunter. Legend has it that after various nefarious deeds by his jealous rivals, this one time favourite of the king was dismissed from royal service and distraught, he hanged himself from an oak tree which was then struck by lightning. The hart is "one of the manifestations of his restless spirit" and, according to Michael Drayton's poem of 1627, a banner with this badge, or something very like it, was carried by the men of Berkshire at the Battle of Agincourt "Barkshire a Stag, under an Oake that stood".
Research conducted by Brady Ells, located and identified a seal used by the former Berkshire County Council before its formal acquisition of arms in 1947, which depicted the hart and stag emblem, in both monochrome seal and coloured versions, where a naturally brown stag, stands under a similarly naturally coloured, oak tree, with leaves and surrounding grass, set against a field of gold. The latter colour perhaps being a reference to Berkshire's status as a "Royal County", owing to the presence there of the principal royal residence, Windsor Castle. The seal is present on this 1912 image of the commemorations for the royal visit to Hungerford, affixed to the sign over the street Hungerford shield where the light coloured background against which the hart and oak are placed, is evident. The specific colours of the county seal also appeared on the engines of the county fire service. (Source)
Jason Saber, 24 May 2017

The flag features the traditional stag and oak symbol which has long represented Berkshire. Michael Drayton (1563-1631), a contemporary of William Shakespeare, cited it in his 1627 poem The Bataille of Agincourt, which describes the men of Berkshire marching in 1415 under the symbol of "a Stag, under an Oake that stood". Here, a red stag "royally attired" with twelve-point antlers represents the county. The stag evokes Berkshire's title as the "Royal County of Berkshire", its celebrated forests and its herds of deer. Twenty-four representative bodies came together to submit this design for registration. The Lord Lieutenant of Berkshire, James Puxley, provided additional support.

Flag flown at Department for Communities and Local Government

See also the Department for Communities and Local Government stream on Flickr where they have a set of county flags. Berkshire is full of unitary authorities these days, so I'd be interested if anyone knows the genesis of that one, as there is no authority as such to promote a flag.
Colin Dobson, 7 October 2010

Two earlier proposals for a Berkshire County Flag were considered, but eventually discarded after the decision was made to adopt their current flag.

Berkshire has never had a flag, although the county council occasionally used a stylised monochrome version of the two lions under a crown. Organisations in the county, on the other hand, have always used the white hart beneath its oak, as supposedly used at Agincourt, and this may be seen in logos and flags of various designs and colours, such as those of:

Having been approached by a number of organisations concerning this matter, RBH offers the design on the Berkshire History Website which may be freely used by interested parties. The overall design is loosely based on the Welsh National flag and the Buckinghamshire arms, which both have animals before two coloured bands (although Buckinghamshire's are vertical). The colours of blue and white are taken from the old county arms, but are also used by Reading Football Club and may be seen as representing the River Thames. The circular form of the golden deer and oak is similar to that used by both the Royal Berkshire Regiment and the Berkshire Federation of Women's Institutes. The colour of gold on blue (and white) is again mirrored from the old arms and may be seen to represent Royalty as well as the Autumn colours of the oak illuminated by a lightning strike.
David Nash Ford, 29 March 2007

The designer of the flag on the web page mentioned above appears to have taken the device from the helmet plate of the Royal Berkshire Regiment and put it on a blue and white background. This explains the circular shape of the emblem.
Laurence Jones, 30 December 2006

The Nash Ford design was deemed unsuitable because when seen from a distance it appeared to have a large letter "C" on it, and the two lighter colors of gold and white did not contrast well enough to be seen from any distance, especially on the the white top field. A later proposal, created by Michael Garber, retained the colors and symbols featured in the original design by Nash Ford, but attempted to correct its shortcomings.
Pete Loeser, 9 September 2020

This former Berkshire County Council flag is being marketed for Berkshire. The commercially available flag shows the two lions along with the crown atop them. (source)
Ian MacDonald, 14 July 2010 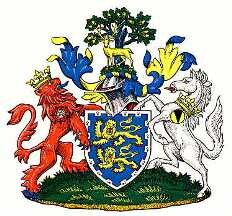 Berkshire County Council gained the status of Royal County in 1957, and the crest was used on its first flag, which probably was created in 1961, or some year later. In 1947 the County Council was awarded with the coat of arms, and in 1961, got the supporters.

The old arms showed the same shield and crest, except that in the new arms the crest rises from a mural crown, and in the old arms from a wreath. The lion supporter now wears the crown around its neck, in the old arms the lion was crowned. The main difference was the horse supporter. The old arms showed a white horse, referring to the Vale of the White Horse. Instead of a star the horse was wearing a yellow circle, charged with a black pile (pyramid pointed downwards), referring to the Harwell Atomic Energy Station.

In 1974 the County Council was awarded with the new Coat of arms (in fact just slight modifications), and the flag was changed into the two lions flag, a banner of arms.

The two lions are the lions of England and symbolise the fact that Berkshire is a Royal County. The embattled border is intended to represent the castles in Berkshire, among these is the famous Windsor Castle. The lion supporter is also a royal symbol. The lion is wearing a collar with the rose of Tudor, a symbol for the founding of Eton College by King Henry VI. The black horse represents the county's considerable connections with horse racing. The old local breed of horses was, according to historical sources, black. The horse wears a collar with a six-pointed star, referring to the six boroughs and districts in the county. The star also refers to Sir William Herschel, the famous astronomer. The crest symbolises the stags and forests of Windsor Forest, and has been the badge of the County since the 14th century. The coat of arms and blazons are from Heraldry of the World
Valentin Poposki, 25 July 2020

Here is the list of all entities on the territory of the former Berkshire County in the period 1889-1974:

Coat of arms and blazons from: Heraldry of the World
Valentin Poposki, 25 July 2020