Introduction: The Ceremonial County of Merseyside

"Merseyside is a county in the North West of England, with a population around 1,365,900 residents. Its name is taken from the River Mersey and in 1974, it came into existence as a metropolitan county in after the Local Government Act of 1972. The county has five metropolitan boroughs around the Mersey Estuary, including the City of Liverpool. The Merseyside County Council was scrapped in 1986, and its districts and boroughs now have their own authorities. However, the county still exists by law and as a frame of geographic of reference."
"Merseyside is divided in two by the Mersey Estuary: the Wirral to the west of the estuary on the Wirral Peninsula; the rest of the county being on the east. The eastern boroughs border Lancashire towards the north and Greater Manchester to the east. Both parts of Merseyside - west and east of the Mersey estuary - border Cheshire towards the south."
"Birkenhead and Wallasey used to be part of Cheshire, whilst St Helens, Bootle, Liverpool and Southport were once part of Lancashire." (source)
Since Liverpool has a lengthy tradition of music, both classical and pop, and the new county was formed in the heyday of The Beatles and other popular musical groups like Gerry & the Pacemakers (of "Ferry across the Mercey" fame), and more recently A Flock of Seagulls, many jokingly say they gave birth to Merseyside and lasted longer. They certainly put Liverpool in the lime light.
Pete Loeser, 28 October 2020

Description of the Merseyside flag

For a short 12 years (1974-1986) the Merseyside County Council shared power with the local governments and district councils in Merseyside. However the county council was abolished in 1986 and so its districts (the metropolitan boroughs) are now effectively independent unitary authorities. However, the metropolitan county continues to exist in law and as a geographic frame of reference.
This manufacturers variant blue flag with the arms of the Merseyside County Council centered upon it is also sold as the Merseyside flag.
Pete Loeser, 29 October 2020

Merseyside was abolished as an independent council in 1986, but did used this coat of arms. The white and blue waves refer to the River Mersey, and the six mural crowns to the six constituent districts. The cormorant or Liver Bird is from the arms of the City of Liverpool. The supporters combine national emblems with those of the sea.

The service came into being in 1974 when Merseyside was created. The Merseyside Police are the territorial police force responsible for policing Merseyside. The force has 3,500 police officers, 1,600 police staff, and 253 police community support officers, and 208 special constables.
Pete Loeser, 28 October 2020 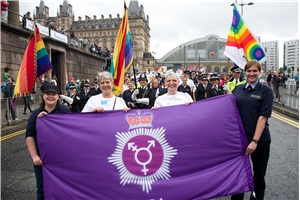 At the 2013 Pride demonstrations in Liverpool we saw the first ever National Trans Police Association Flag paraded through the city centers. Merseyside's Police Commissioner, her Deputy, and Merseyside officers and staff marched under the banner "Policing with Pride" alongside colleagues from other forces.
Pete Loeser, 29 October 2020

The Merseyside Fire and Rescue Service is the fire and rescue service covering the county of Merseyside. It consists of over a thousand fire brigades stationed in Sefton, Knowsley, St. Helens, Liverpool and Wirral. It was first formed in 1974 by merging all the the fire brigades of the City of Liverpool, Birkenhead, Bootle, Southport, St Helens, Wallasey and parts of Lancashire and Cheshire together. They have five Area Commands located in Liverpool, Wirral, Sefton, Knowsley, and St Helens. They also have a fulltime marine rescue unit that operates out of the River Mersey Community Fire & Rescue Station that operates on the River Mersey.
Pete Loeser, 28 October 2020