Warwickshire, known as "Warks," is located in the West Midlands region of England. It is bordered by Leicestershire, Staffordshire, Worcestershire, West Midlands, Northamptonshire, Gloucestershire, and Oxfordshire. The current county boundaries were set by the Local Government Act of 1972, but the historic county boundaries included Coventry, Sutton Coldfield and Solihull, as well as much of Birmingham. The county town is Warwick, but the largest town is Nuneaton. Other significant towns in the county include Rugby, Leamington Spa, Bedworth and Kenilworth. The county is divided into five districts of North Warwickshire, Nuneaton and Bedworth, Rugby, Warwick and Stratford-on-Avon.
Warwickshire was a division of the kingdom of Mercia in the early 11th century. The first reference to Warwickshire was in 1001, as Wæringscir which means "dwellings by the weir." It started with an Anglo-Saxon burh (a fortified settlement - later named Warwick) that was first built in 914 by Æthelflæd, the daughter of Alfred the Great. The burh she established was one of ten to defended Mercia against the invading Danes.
During the Middle Ages Warwickshire was dominated by Coventry, which was one of the most important cities in England at that time because of its importance in the textiles trade. The whole county was deeply involved in the English Civil War, with key battles and other skirmishes taking place in the county.
During the Industrial Revolution the cities of Birmingham and Coventry became two of Britain's most important industrial centres, both of which were then within Warwickshire's boundaries. Today Warwickshire has a thriving tourist industry because of this.
The county is famous for being the birthplace of William Shakespeare at Stratford-upon-Avon, and today tourists visit the county to revisit Shakespeare's England. In Stratford-upon-Avon, the theatres of the Royal Shakespeare Company still produce his famous plays. They also come to Warwickshire to see the remains of the motte-and-bailey forts, the gate houses and towers that still survive. Miles of canals and stairway locks are there. They can visit towns with streets overhung by timber-framed houses and the imposing castle and fortifications such as Warwick Castle. In Royal Leamington Spa is the Heritage Motor Centre with its nod to the motor industry. Coventry's medieval cathedral and 14th-century Guildhall are also a big attraction. Warwickshire is definitely worth a visit.
Pete Loeser, 3 May 2021

Description of the Warwickshire Flag

I'm happy to advise that having received the approval of a number of county bodies and the sanction of the county's High Sheriff the attached Warwickshire flag has consequently been added to the Flag Registry. This has been confirmed by Philip Tibbetts.
Jason Saber, 15 August 2016

The flag features the traditional bear and ragged staff used since the Middle Ages to represent the Earldom of Warwick. Many military, administrative, sporting and civic entities have employed it over the centuries. Several representative bodies submitted this traditional pattern for registration. The county's High Sheriff and Lord Lieutenant also offered their support.

image by Pete Loeser, 4 May 2021
image based on this photo

This flag is being marketed for Warwickshire. The Warwickshire flag is a banner of the coat of arms of the Earl of Warwick. It features a bear in chains undoubtedly a reference to the sport of bear baiting which was very popular in medieval times. Description: Yellow over red (1:2), with a white bear in chains and a "ragged staff.
Source: English County Flags: Warwickshire
Ian MacDonald, 14 July 2010 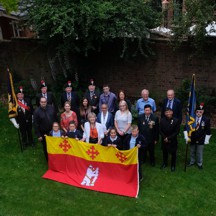 In 2019 this flag was among 50 raised in Parliament Square to celebrate the first Historic County Flags Day according to the Leamington Observer in an article written by Ian Hughes (cited below), titled: "Flying the flag for Warwickshire at Houses of Parliament." The article stated that: "Ahead of the day Warwickshire County Council leader Izzi Seccombe was joined by 20 proud residents, of all ages and from all parts of the county, in the garden of the historic Judges House in Warwick. The group held aloft the Warwickshire flag which is flown outside the county council's offices at Shire Hall each day."
This would seem to suggest that it has become the de facto Warwickshire County Council Flag if it is flown in front the Shire Hall daily.
Although in use, I was unable to find any evidence it is officially registered.
Source: Leamington Observer (23 July 2019 ed.) - "Flying the flag for Warwickshire at Houses of Parliament" by Ian Hughes.
Pete Loeser, 3 May 2021

To quote the "Warwickshire Heritage & Culture" page of the official Warwickshire website:

The coat of arms granted to Warwickshire County Council in 1931 is composed of various elements, combining the county's past and present. It is described in heraldic language as "gules, a bear argent, muzzled of the first, collared and chained or, and supporting a ragged staff of the second, on a chief also or, three cross-crosslets of the first; surmounted by a mural crown or". In ordinary terms this means a silver bear with red muzzle and gold collar and chain supporting a silver ragged staff on a red shield, with three red crosses (each of which has its arms crossed) on a gold band at the top, the whole surmounted by a crown.

The origins of these emblems are lost in the distant past, but have been associated with the earls of Warwick since at least as early as the 14th century...The bear and the ragged staff were first used by the Beauchamp family, who became earls of Warwick in 1268, as a badge or mark of identity in addition to their own coat of arms...The...motto (being the Norman-French for 'not without right') will be recognised by many as being the motto of William Shakespeare, without doubt the county's most famous son. It suggests the authority of the County Council.

To summarize, the Warwickshire County Council Coat of Arms combines the arms of the medieval earls of Warwick, the motto of William Shakespeare, and the mural crown (a crown that looks like it is made of stone) of the modern civic authority - it connect both Warwickshire's past and present.
Source: Warwickshire Website: Heritage & Culture.
Pete Loeser, 3 May 2021

The Warwickshire County Council uses these and similar logos on their website, correspondence, stationery, and other publications.
Pete Loeser, 3 May 2021

As usually happens when a flag void exists before a governing body takes action there have been several helpful suggested designs offered. The first proposed Warwickshire flag was posted on Wikimedia Commons. The second was a Warwickshire redesign, inspired by the flag of Amsterdam, that appeared on Reddit several years ago.
Pete Loeser, 3 May 2021

Badge
images by Pete Loeser, 3 May 2021
Drawings based on this photo.

image by Pete Loeser, 3 May 2021
Drawing based on this photo.

The Warwickshire Police officers marched with this special rainbow flag to celebrate gay rights at the Birmingham Pride Carnival Parade held on 2 June 2012.
Pete Loeser, 3 May 2021 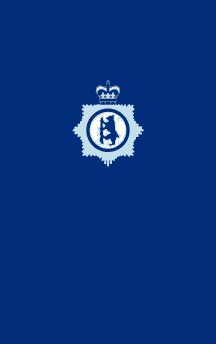 This coffin drape is provide by the commercial manufacturer who is the official Manufacturer to police services in the United Kingdom.
Pete Loeser, 3 May 2021

Badge
images by Pete Loeser, 3 May 2021
Based on this image.

The Warwickshire Fire and Rescue Service, headquartered in the town of Leamington Spa, is the fire and rescue service serving the whole county of Warwickshire. It was created by the Fire Services Act of 1947 as the Warwick County Fire Brigade. It is administered by Warwickshire County Council.
Pete Loeser, 3 May 2021

This coffin drape is provide by the commercial manufacturer who is the official Manufacturer to Fire and rescue services in the United Kingdom.
Pete Loeser, 3 May 2021

image by Pete Loeser, 3 May 2021
This drawing is based on the flag shown in this photo.

Warwickshire College is managed by the Warwickshire College Group (WCG) which administers several colleges of further education in the counties of Warwickshire and Worcestershire. It is the largest group of further (adult education) institutions in the English West Midlands and in the United Kingdom as a whole. It is one of the five colleges in the United Kingdom empowered by the Privy Council to award Foundation Degrees. The main campus for WCG is located in Leamington Spa.
Pete Loeser, 3 May 2021 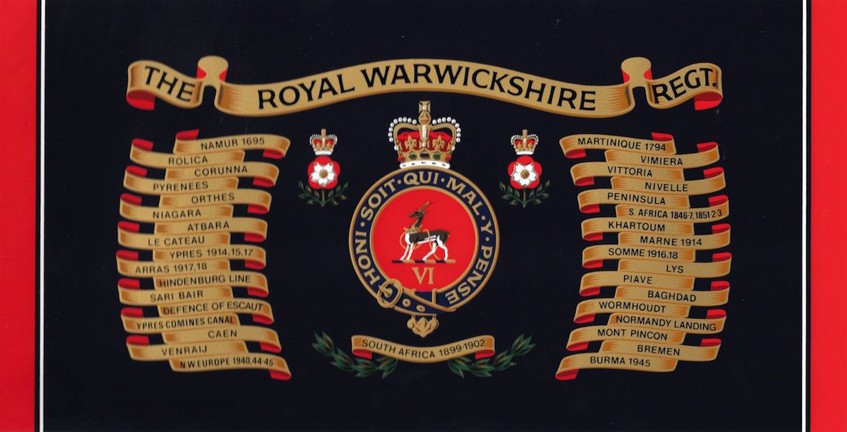 Battle Honors
images located by Pete Loeser, 3 May 2021
First drawing based on this photo. 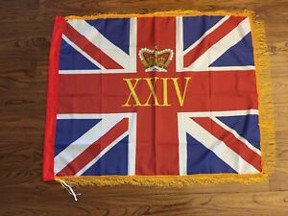 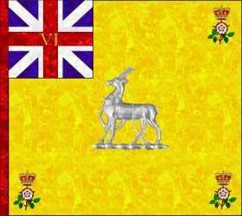 In the military the practice of carrying colours, standards or guidons, in ceremonies is common. Traditionally they were meant to act as a rallying point for troops and to mark the location of the commander, but today they serve only ceremonial purposes. In modern warfare the location of troops or commanders is best not advertised. The original idea goes as far back as the Ancient Egyptians, Greeks and Romans who carried Battle Standards. In the Late Middle Ages it was formalized with standards being emblazoned with the commander's coat of arms.
These are several examples of those used by Royal Warwickshire military units.
- Example #1: Photo of the colours of 24th (Queens) Regiment of Foot (2nd Warwickshire).
- Example #2: Drawing of battalion colours, with battle honors, part of the 24th Regiment by Eugen Podolean.
- Example #3: Drawing of the colours of the British 6th Regiment of Foot (Royal Warwickshire) drawn by David Myers, dating back to the Seven Years War.
Pete Loeser, 3 May 2021