Leicestershire is classified as both a Traditional and a Ceremonial English County located in the English East Midlands and completely landlocked. It dates back to the Doomsday Survey. It is located between the counties of Nottinghamshire, Lincolnshire, Rutland, Northamptonshire, Warwickshire, Staffordshire, and Derbyshire. Leicestershire is named after its largest city, Leicester, which is located in the middle of the county and strangely enough administered separately from the rest of the county. Think of it as a huge doughnut. The ceremonial county, everything but the city of Leicester, remains the only county in England other than Greater London that has not adopted an official county flag, although it has a popular "de facto" flag that is seen everywhere in the county.
Pete Loeser, 15 October 2020

The flag of Leicestershire County Council is a banner of the council's arms: Quarterly per fesse indented argent and gules, in the first quarter a torteau charged with a cinquefoil ermine, in the second quarter a lion rampant double queued also argent, in the third quarter an ostrich feather ermine, and in the fourth quarter a maunch sable. For those who don't understand heraldic language: the flag is divided in four fields; the division between the first and third, and the second and fourth fields, is indented. The first field is white, with a red disk with a white cinquefoil with ermine; the second field is red with a white double-tailed lion; the third is red with an ostrich feather with ermine; the fourth field is white with a black sleeve. The coat of arms was granted on the 25 January 1930. I don't know when the flag was adopted or first used. It has proportions of 2:3.
Source: Leicester Website
Pascal Vagnat, 5 November 1997

The cinquefoil was the seal of Robert de Beaumont (sometimes spelt Bellomont) who was the grandson of the first Earl of Leicester. It is suggested that the cinquefoil represents a five-petalled flower called the pimpernel, in a punning reference to his mother who was a Fitz-pernell.
He died in 1206 and the earldom passed to his sister's husband Simon de Montfort whose forked-tailed lion was described by the heralds in Anglo-French as, 'de gules ove un leon blank la cowe furchee'. The zig-zag divisions of the quarters also derive from Simon de Montfort who held the Honour of Hinkley in Leicestershire, the arms of which consisted of a shield parted palewise indented silver and red.
Simon de Montfort was killed at the battle of Evesham in 1265 after leading an initially successful revolt of the barons against King Henry III, who now conferred the earldom on his son Edmund who was also Earl of Lancaster. His grandson ultimately passed the title to John of Gaunt, Duke of Lancaster, represented by the ermine ostrich feather. When John of Gaunt's son ascended the throne as Henry IV, the earldom was merged with the Crown.
The forked-tailed lion also represents Lord Robert Dudley who was created Earl of Leicester by Queen Elizabeth in 1564; though his lion was green on gold..
They appear to have run out of earls for the fourth quarter, and the sleeve comes from the arms of the Hastings family, Barons of Loughborough.
David Prothero, 11 November 1997

The "Leicester Mercury", 22 June 2009, has an article dedicated to the flag, explaining why the flag is not very commonly used in Leicestershire:

Conservative MP for Bosworth David Tredinnick said: "There is no long tradition of flag flying in Leicestershire and I think that is because it's not really a very old symbol - certainly nowhere near as old as some other counties whichhave ancient symbols going back to the War of the Roses."

A spokesman for the county council said: "We fly the flag from the central pole of the County Hall every day. When we fly the Union flag we move the county flag to one of the outside poles as no flag can be flown in a more superior position than the Union flag."

The county flag is not flown from Leicester Town Hall. A city council spokesman said: "We fly the Union flag daily. There is also a civic flag with the Leicester civic crest upon it and which is flown for civic events..."

The logo symbol of the Leicestershire County Council has a fox standing on a large letter "L". Leicestershire is considered to be the birthplace of fox hunting.
Pete Loeser, 15 October 2020

A Proposed Flag for Leicestershire

The proposed flag for historic Leicestershire is now available as a flag or car sticker. It is being put forward by a group of residents, including the City of Leicester. It is hoped the design will become popular, so that it can be registered by the Flag Institute as the official flag.
The five-petalled rose (cinquefoil) is an ancient badge of Leicester and of the county, seen, for example, in the arms of the city today. The running fox is a popular motif of many local associations, and both Leicester City Football Club and Leicester County Cricket Club are known as the Foxes. Red and white feature in many local badges, often with a zigzag division as on the standard of Simon de Montfort, Earl of Leicester, one of the founders of parliamentary government in the 13th Century.
Source: Article on Facebook
John Moody, 6 May 2019

Leicestershire is the only English county without a registered flag but the "the fox and cinquefoil Flag", is favoured by a contingent hoping to see the county added to the registry, combines several themes and devices found on civic arms, club badges and organisational emblems throughout the county, namely, a field divided red and white; a zigzag or serrated division; a floral depiction termed a cinquefoil; and a running fox.
Valentin Poposki, 29 June 2020

The arms of the Leicestershire were approved on 25 January 1930. Several family coat of arms are incorporated into it. The first quarter shows a cinquefolium of ermine, taken from the family arms of Robert de Beaumont the first Earl of Leicester (1103). In second quarter we find the two-tailed lion of Simon de Montfort who inherited the title of Earl of Leicester in 1206. The third quarter features the badge of John of Gaunt, Earl of Leicester in the 15th century. The fourth quarter shows a black maunch (the sleeve of a medieval lady's dress) which was the badge of the powerful Hastings family who built several castles in the county. The two supporters represent the two main industries of the county, a bull for grazing and a ram for the wool production. The fox represents the tradition of fox hunting.

The Leicestershire Constabulary, established 1839, is the territorial police force responsible for policing Leicestershire and Rutland. Its headquarters is located at Enderby in Leicestershire. In 2012 they changed their name to a more modern "Leicestershire Police" and their flag, badge, and logo to match.
Pete Loeser, 15 October 2020 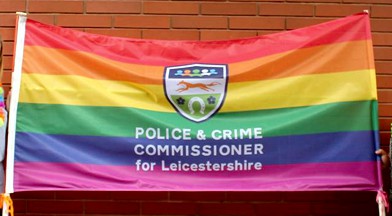 images by Pete Loeser, 15 October 2020
based on this photo of the Leicestershire Fire and Rescue Service Headquarters.