The World Book Encyclopedia (Chicago, 1944) shows a flag for Northern Ireland that I have not seen before. It is a British Blue Ensign with a harp symbol on the fly.
Roger Moyer, 11 August 1999

I think it's fairly clear what happened here: an Irish symbol was inserted in the fly of a British ensign to meet the vexillologist's perceived need for a Northern Ireland flag. It reminds me of what happened in the case of the 'green ensign' that was attributed to Ireland in some foreign flag charts of the 19th century.
Vincent Morley, 14 August 1999

This flag was also reported from a poster dated 1943 - the image is identical to that shown in the 1944 Encyclopedia, and clearly one is the reproduction of the other.
Poster reported by Luismi Arias, 4 August 2001

It is certain that the blue ensign charged with a harp was never used as the flag of Northern Ireland. Indeed, there was no flag for Northern Ireland prior to 1953 when a banner of the government's arms was introduced. This in turn ceased to be official when the Northern Ireland government was abolished in 1972 but it continues to be found in flag books - demonstrating once again the principle that "vexillology abhors a vacuum" ... if a territory doesn't have a flag, vexillologists provide it with one.

I have recently found what may be the first direct evidence for the use of a "harp ensign" in Ireland. I came across it in a book by James Carty entitled 'Ireland from the Great Famine to the Treaty of 1921' (Dublin, 1951). The volume is long out of print and now quite scarce. It includes a drawing of a British army recruitment post in Dublin's College Green in 1915.

Four flags are visible around the statue of Henry Grattan, an 18th-c. statesman largely responsible for re-establishing the independence of the Irish parlaiment in 1782. The flags are a Union Jack, two "harp ensigns", and a fourth flag that cannot be clearly distinguished (a red ensign perhaps?). Unfortunately, the cantons of both of the "harp ensigns" are indistinct and the possibility that they may be Dublin municipal flags cannot be excluded, although I would consider this to be somewhat unlikely in view of the context.

The book states that the original drawing appeared in 'The Lady of the House', a women's magazine published in Dublin until 1920. I have gone through all the issues for 1915 and 1916 in the National Library of Ireland and have failed to find the illustration. Perhaps it appeared in 1917 or later, or in 1914 (although the caption in the book says the drawing dates from 1915), or perhaps it was taken from a different publication. In any event, unless a clearer version of the drawing can be found it won't be possible to say for certain that this is indeed a long-sought example of the "harp ensign" being used in Ireland.

Note that the flag of Northern Ireland of the years 1953-1972 was still in use after 1972, both by protestants as a political sign of loylaism towards the UK and as an emblem/flag when the Northern Ireland football team played international games, wasn't it? So even if it was not official, it was still in practical use as a flag.
Elias Granqvist, 11 August 2001 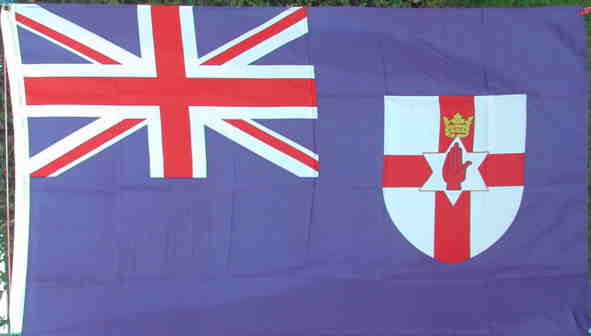 In my quest for Defaced Blue Ensigns on the Internet, I came across this flag that it is supposed to be a brand new flag. Obviously it is not a "real", official flag due to many reasons. One give-away is the 3:5 ratio and the cheap Taiwanese Poly material. I was wondering if there are any Northern Irish on this board that could confirm or deny the usage of this flag in the province? Do you know anything more about this flag?

I remember there was a version of the Northern Irish flag used by the Loyalists some years ago that sported a white fimbriated Union Jack in the corner of the flag. Kind of like a White Ensign with the crowned Red Hand of Ulster in the middle. Is this still used? And does anybody know why the Union Jack was fimbriated?
Mattias Hansson, 12 November 2003

Another clue: the crown on the flag is ducal, not the royal one as it should be.
Miles Li, 12 November 2003

It could of course, be a badly made version of an official flag - the proportions, fabric, crown and union jack etc., which would not be all that unusual - but I, for one, have never heard of a Blue Ensign version of the 'Stormont' flag?
Christopher Southworth, 12 November 2003

It is vaguely like the ensign of the Royal Ulster Yacht Club. Red hand on white shield surmounted by a royal crown.
David Prothero, 13 November 2003

This is an unofficial flag. If nothing else the defacement is overlarge for a pre-1973 flag, the Union canton is not in the correct proportions of 1:2, and the crown is not even remotely like either of the two possible official patterns (the Tudor Crown or the St Edward's Crown).
Christopher Southworth, 2 June 2005