Dundee City Council states that the flowers are "three lilies of purity" representing one of the City's two Patron Saints, the Madonna. A "Madonna lily" also appears as a Crest in the full Coat of Arms (see below in the Lord Provost's flag).
Colin Dobson, 17 February 2006

This is the car flag of the Lord Provost (Scottish mayor) of Dundee. It was provided to Dundee's sister city of Alexandria, Virginia, in exchange for one of their flags.
Christopher Bedwell, Graham Bartram, 17 September 2004

The Coat of Arms is blazoned as follows:

"Azure, a pot of three growing lilies Argent. Above the Shield is placed a coronet appropriate to a statutory Council of a City (VIDELICIT:- a mural coronet Or masoned sable), and on a Wreath of the Liveries is set for Crest a lily Argent, and in Escrol over the same this Motto "DEI DONUM" and in another Escrol under the Shield this Motto "PRUDENTIA ET CANDORE" the said Shield having for Supporters two dragons, wings elevated, their tails nowed, together underneath Vert;"

The date of the Grant of Arms is 03 June 1996. An English translation of the motto "Dei Donum" is 'Gift of God' and of the motto "Prudentia et Candore", 'with thought and purity'.

Sources:
(1) 'City of Dundee Scotland: A Chronicle of The City's Office Bearers, Chambers, Regalia, Castles & Twin Cities', undated but the list of Lord Provosts stops at 1999 and authorship is attributed to Gordon Bennett Design Limited. Note: This document contains the following footnote:
"The scroll which is held in the City Chambers is the Master Document from which all copies of the Crest must be taken to ensure artwork and colours are correct. It would follow that all past Coats of Arms should be removed, but from the point of history as well as economy, this is not always prudent and within the City Chambers, whether Coats of Arms in bas relief, stained glass or other form, these have been retained and are often a puzzle to visitors trying to spot the differences that have taken place over the years."
(2) Dundee City Council web site, Frequently Asked Questions, City Archives, dated 26 September 2005 http://www.dundeecity.gov.uk/faq/faq2.htm 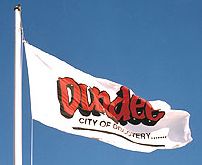