Corpus Christi College
Coat of Arms:
Tierced per pale at dexter Azure, a pelican Or with wings endorsed vulning herself; in centre Argent, thereon an inescutcheon, charged with the arms of the Bishopric of Winchester - i.e. Gules, two keys addorsed in bend, the uppermost Or and the other Argent, a sword Argent interposed between them in bend sinister, hilted Or - ensigned with a mitre Or; at sinister Sable, a chevron Or between three owls guardant Argent, on a chief Or three roses Gules, seeded of Or and barbed Vert.
This little ‘ bee-hive’ was the first outward manifestation of the arrival of the Renaissance at Oxford. The new college even appointed a lecturer in Greek! It was founded in 1517 by Richard Foxe, an accomplished statesman. Foxe worked as a diplomat for Henry Tudor, the later King Henry VII. Later he became Bishop of Winchester. He was involved in Oxford and Cambridge Universities. He had been visitor of Magdalen College and Balliol College, had amended Balliol's statutes for a papal commission, in Cambridge he had been Master of Pembroke College for 12 years and had been involved in the foundation of St John's College, as one of Lady Margaret Beaufort's executors.
The central white field displays the arms of the Bishopric of Winchester. On the sinister field are displayed the arms of Hugh Oldham, Bishop of Exeter, a benefactor.
The Pelican Sundial is the large pillar in the centre of Corpus' main quadrangle and dates from 1579. It is a 3D-representation of the dexter field of the arms. The sundial is named after the gold-painted pelican on an armillary sphere at the top of the pillar. Actually it is a misnomer, as the pillar contains 27 separate sundials.
Sources: John P. Brooke-Little: Oxford University and its Colleges, Oxford 1962
and https://en.wikipedia.org/wiki/Corpus_Christi_College,_Oxford
https://en.wikipedia.org/wiki/St_Hugh%27s_College,_Oxford
Klaus-Michael Schneider, 8 March 2019 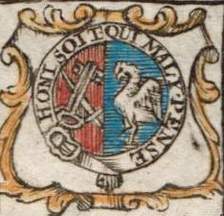 The flag is blue with ratio approx. 5:6, displaying a pelican passant Or with wings endorsed, vulning herself with blood drops Gules.
Source: https://heartheboatsing.files.wordpress.com/2016/06/pic-10.jpg
Klaus-Michael Schneider, 13 March 2019