New College
Flag:
It is a crimson-yellow-crimson vertical triband. The yellow stripe is slightly broader and charged with a badge as follows: a white shield displaying two chevronels Sable between three heraldic roses Gules barbed and seeded proper, surrounded by the belt of the Order of the Garter, and topped by a yellow royal crown with scarves of the same, at the bottom edge there is the motto ōMANNERS MAKYTH MANö in counterchanged colours, at the top of the yellow stripe there is a crimson inscription ōA.D. 1379ö
Source: best seen here: https://www.facebook.com/newcollegeboatclub/posts/632804770219230

Meaning:
I am afraid, I canÆt offer more than an educated hypothesis: College and boat club share the same flag. The date of foundation at the top edge is of course that one of the college and not of the boat club. All photos of rowing events, like Summer Eights and baptising of boats, also show this flag, thus it is in common use of both institutions.
The images in both 1930ies sources are tiny but have this one in common, but they differ in colour:
https://www.alamy.com/stock-photo-three-postcards-showing-the-oars-flags-and-arms-of-oxford-university-79810690.html
displays the flag as blue-white-blue triband with yellow inscription at the bottom edge and white shield, and
http://www.rowing-memorabilia.de/index.php/2-uncategorised/4135-pc-gbr-oxford-university-colleges-oar-blade-colours-flags-and-arms-3-consecutive-cards
displays it as pink-white-pink triband with white inscription at the bottom edge and white shield. The former probably is more erroneous than the latter. In both sources the inscription at the top edge is missing, but probably just the realisation of the complete pattern failed. As an additional information, within the images of 1720 that one of New College is the only one without shield, just showing a badge, i.e. a disc with the charges of the arms and surrounded by a belt. Furthermore
https://www.worthpoint.com/worthopedia/1922-summer-eights-college-boat-club-518904041
this source displays a triband of very dark blue, with a sting of red, and yellow with arms and date of college foundation. It is a leaflet of the boat club about the Summer Eights 1922.
Klaus-Michael Schneider, 13 March 2019

New College
Coat of Arms:
Shield Argent, two chevronels Sable between three roses Gules barbed and seeded proper, i.e. Vert and Or.
Motto: ōMANNERS MAKYTH MANö
William of Wykeham, Bishop of Winchester, Chancellor of England, and one of EnglandÆs richest men obtained a Papal Bull for the endowment of Winchester College in 1378. In the following year he founded ōSeinte Marie College of Wynchestre in Oxenforde,ö since 1386, when it had been completed known as New College. The college arms are Wykehams personal arms and are used together with the motto. The two chevronels, are said to have been added when he became a bishop and the other representing his skill with architecture, the chevron was a tool used by masons. The motto was in many respects fairly revolutionary. First, it was written in English, rather than Latin, which makes it very unusual in Oxford, Secondly, the motto makes a social statement; it is not by birth, money, or property that an individual is defined, but by how he or she behaves towards other people. Wykeham's motto is reminiscent of the insight found in Aristotle's Ethics, that is what he or she does, and what we do is what we are.
Sources: John P. Brooke-Little: Oxford University and its Colleges, Oxford 1962
and https://en.wikipedia.org/wiki/New_College,_Oxford
Klaus-Michael Schneider, 5 March 2019 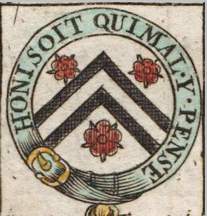