The flag of San Josť Pinula is vertically divided green-white-yellow with the municipal coat of arms in the middle. There is no record of its adoption date.
Green is the natural and beautiful colour of the local mountains and forests, and, most of all, the representation of agriculture and cattle-breeding, of the green orchards and pastures. Green is also the symbol of aspiration to a better future.
White represents the purity of God, of the country, and of the municipality. It is also the symbol of innocence and inner peace.
Yellow represents, associated to white, the Catholic faith, the unity of the church and the unity of the communities.
Ivan Sache, 7 February 2017 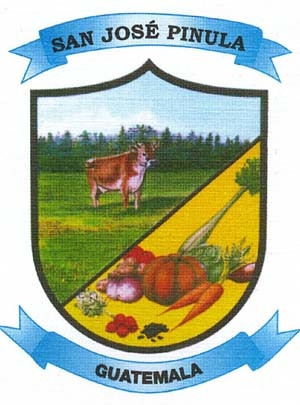 The coat of arms of San Josť Pinula is prescribed by a Municipal Agreement adopted on 6 December 1979. The present-day's design of the arms is credited to Markusse LenŪn Lutin Calderůn, student at the Instituto Jorge GarcŪa Granados (3rd basic grade), winner of a contest organized in 1986 for the celebration of the bicentenary of the municipality; the President of the Republic of the time, Marco Vinicio Cerezo Arťvalo (b. 1942; in office, 1986-1991) was member of the jury.

The coat of arms combines vivid colour and the realistic representation of cattle-breeding and agriculture. Yellow, green and celestial blue contrast with the colours of the municipal flag (green, white and yellow).
The landscape featured in the background is part of the primary forests that exist in the mountains, while the green pasture with the Jersey cow represents the San Francisco Las Nubes estate. This proudly recalls that San Josť Pinula is the place were the Jersey cow, among the most productive milk cows, was first introduced in Guatemala, more than 100 years ago, by Josť SolŪs.
The vegetables represented in the lower part of the shield are shipped to the national and international markets; the ALCOSA company (Alimentos Congelados S.A.; established in 1971 and purchased in 1975 by US-based Hanover Brands, now Hanover Foods) ships daily deep-frozen and processed vegetables to different countries.
Source: http://toditosanjosepinula.galeon.com - Unofficial website, texts by the late Josť Mario Lutin Solares.
Ivan Sache, 7 February 2017