A flag from the time of the Croatian national rebirth is preserved in the Croatian Historical Museum. The flag is square. On the obverse is the "Illyrian" coat of arms, "Gules, a crescent and mullet argent", while on the reverse is the Croatian coat of arms "Checky 4 x 5 gules and argent. The use of this flag, maybe decorative, is unknown. 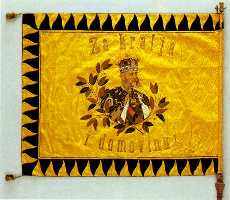 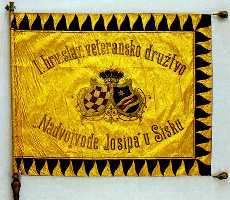 Double yellow silk brocade, tassels, oak, relief embroidery, applique, carving, 146 x 186 cm, length of staff 360 cm.
A rectangular flag with a border of embroidered black triangles and tassels on the ends.
Obverse: In the centre of the field in separate cartouches the coats of arms of Croatia and Slavonia surmounted by a crown. The inscription around the coats of arms reads: I hrv.slav, veteransko družtvo 'Nadvojvode Josipa' u Sisku".
Reverse: Bust of Emperor Francis Joseph I with the motto: "Za kralja i domovinu!".
The flag is fixed to the staff with brass studs. The natural colored staff had a finial that has not been preserved.
The flag was donated to the National Museum by the First Croatian and Slavonian Veteran Society from Sisak.

In the 19th and early 20th centuries, there were some obscure attempts to transform Croats into Serbs of Catholic faith. One of the societies that propagated such ideas was the "Croatian and Serbian People's Home" Society (Drustvo "Hrvatski i srpski narodni dom"), established 1904 in Cavtat, a town located in the southernmost part of Croatia.

The society used a flag merging the colors of Croats and Serbs, which followers called "People's flag of united Croats and Serbs". Not mentioned in the society's Statutes (image), its coat of arms was clearly pictured in the pamphlet "People's flag of united Croats and Serbs", issued in 1905 in Dubrovnik by the Cavtat and Konavle Brotherhood (Cavtatsko i konavosko bratstvo).
The flag is made of the two national tricolors merged verticaly, with a coat of arms representing a handshake on a green background with a white five-pointed star.

Brethren of the Croatian Dragon 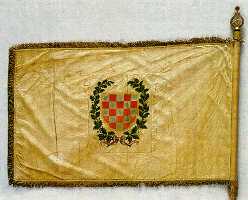 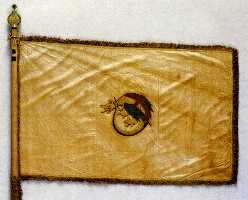 Flag of the Brethren of the Croatian Dragon, reverse and obverse - Images by courtesy of Jelena Borošak-Marijanović, Croatian History Museum (website)

Double pale yellow cloth, accessories, wood, gilt bronze, painting. 78 x 130 cm, length of staff 270 cm.
A rectangular flag edged with fringes.
Obverse: in the centre of the field there is the painted emblem of the Society, a green dragon with the tail wrapped around the neck.
Reverse: in the centre of the field there is the historical Croatian coat of arms with white-and red fields wreathed with an oak and lime branch, tied with a tricolor ribbon.
The staff, which passes through a sleeve, has a finial in the shape of a lime leaf with the emblem of the Society in the centre and the motto "PRO ARTIS ET FOCIS DEO PROPITIO". The foliate finial stands on a semicircular attachment with the engraved date: "1905.-16. XI. 1930".

The Brethren of the Croatian Dragon is a society of noblemen and otherwise eminent persons (writers, intellectuals, philanthropes etc.) with the goal of promoting the Croatian cultural and natioanal values. The society was established in the beginning of the 20th century, maybe in 1905 as indicated on the flag?, existed until the end ofthe Second World War and was recreated in 1990. The Society today uses a similar flag, made no doubt according to this flag kept in the museum. 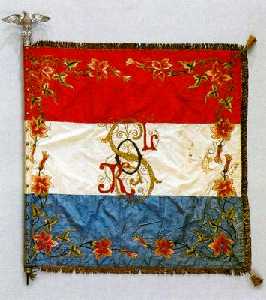 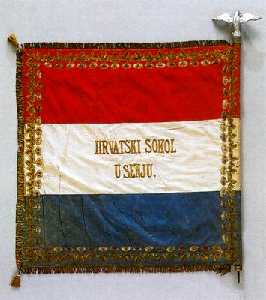 Flag of the Falcon Society in Senj, reverse and obverse - Images by courtesy of Jelena Borošak-Marijanović, Croatian History Museum (website)

Double silk rep, multicolored relief silk embroidery and gold embroidery, gilt metal strands, wood, metal alloy, tin. 138 x 138 cm
A square Croatian tricolor edged with a golden-yellow fringe and tassels on the ends.
Obverse: The monogramm of the Falcon Society is embroidered in Croatian colors in the centre of the field. A border with a floral motif runs along the edge of the field.
Reverse: In the centre of the white field the inscription in gold embroidery reads: HRVATSKI SOKOL / U SENJU. An ornamental border is embroidered along the edge.
The staff has a finial in the shape of a falcon with spread wings. The flag is fixed to the staff with gilt studs with the names of sponsors and the names of societies.

The Falcon (Sokol) society is a (kind of) sporting society of a great importance in Croatian history as it promoted national identity and feeling, together with a sporting spirit. There were such societies in almost all Croatian towns from the end of the 19th century, and many of those flags are preserved. Many of those flags followed similar pattern to this one, though there were others too.