Koprivnica-Križevci County is situated north east from Zagreb, in the valley of river Drava, on the border with Hungary, a very rich agricultural region of Croatia.

The flag was designed by Antonio Grgić, a student in architecture from Koprivnica.

The flag (photo) is described in Article 6 of the Decision as follows:

The flag is with proportions 1:2, quartered red-blue with the coat of arms of the County, bordered yellow, in the middle.

Coat of arms of Koprivnica-Križevci County

The coat of arms is described in Article 5 of the Decision as follows:

The flag is described in Article 6 of the Decision as follows:

The coat of arms is described in Article 5 of the Decision as follows:

The coat of arms is composed of a shield. The shield is triangular. The field of the coat of arms is divided with a spike [per chevron]. In the top part on blue there is a golden cross with three crossbars and a double golden lily. The bottom part is divided with three red and white horizontal bars in which there is a golden rooster with a blue head, crest, beak, wing, tail and legs, turned to the right. One leg is in the air, while with the other it is standing on a green triple mount.

The County Statutes were adopted in 1994, stating that the County has a coat of Arms and a flag, following which the Councillor Dragutin Toth proposed a public discussion before their adoption (Glas Podravine, 8 April 1994 - fac-simile). Later on (Glas Podravine, 22 July 1994 - fac-simile), the County decided to establish a commission to run the contest for the new coat of arms (greater and lesser arms) and flag. The commission consisted of Zlatko Kauzlarić-Atać, Franjo Horvatić, Dragutin Feletar, Dragutin Pavličević, Zoran Homen, Zdravko Šabaric, Renata Husinec, Marijan Biškup, Dragutin Toth, Tomislav Janši and Marijan Špoljar. Several names well-known in Croatia are among them. Prizes were mentioned as 8,000 HRK for the first price and 4,000 for the 2nd (c. 2,000 and 1,000 DEM, respectively), and comparison with the contest held in Virovitica-Podravina County was made, where the first prize was 10,000 DEM. The call for the context was published on 21 October 1994 in Glas Podravine (fac-simile).

On 26 June 1995, the County Assembly was presented the two winning designs for the County symbols, 1st by Antonio Grgić, a student in architecture from Koprivnica, and 2nd by Zoran Lukić from Zagreb (Glas Podravine, 30 June 1995 - fac-simile). Antonio Grgić participated in contests for several other coats of arms and flags, namely: Lika-Senj County, Ogulin, Đurđevac, Koprivnički Bregi, Sokolovac, Gola, Drnje, Koprivnički Ivanec and Hlebine. He was awarded the first prizes for Koprivnica-Križevci County and Đurđevac (Glas Podravine, 4 August 1995 - text).
On 27 September 1995, Glas Podravine (fac-simile) reports that the County discussed the coat of arms and the flag; the original design by Grgić was somewhat different from the finally adopted and subsequently changed to the current one. Grgić explained the rationale of the arms' symbolism: the coat of arms represents the entire territory of the County with the choice of the colours and symbols - the shield shape is taken from the historical coat of arms of Pannonia (sic!) under the jurisdiction of the Anjou dynasty, when Križevci was granted the status of town. The northern edge of the County, Prekodravlje ("over the Drava") is symbolized with a red field, the white stripe beneath it is river Drava; the southern edge is symbolized by the green triple mount, for the mounts of Kalnik and Bilogora. The central symbol, a rooster, is taken as the main symbol of both Koprivnica and Đurđevac; it is holding the triple cross of Križevci, symbolizing also the medieval County of Križevci. The rooster and the cross are colored blue and black, which was criticized by some County Councillors as "too rough"; the author agreed, saying that it symbolizes the warriors of the region against the Ottomans. The design was then offerred to the "public debate". It is said that it was selected "among 9 similar designs" in the contest. On 1 December 1995, Glas Podravine (fac-simile) reports the County's Mayor session, where a new version of Grgić's design was presented, with an "in lively colours updated" rooster, presumably to lift the objections to the blue and black rooster reported above. The design was not satisfactory to all the present, but the final word would be - as it is reported - the the County Assembly, where the delegates would have the option to adopt it or to decide to run another contest.
People from Križevci were dissatisfied with the proposed County's coat of arms (Glas Podravine, 15 December 1995 - fac-simile). Namely, they disliked the idea that the rooster ("of Koprivnica") would be grasping with its talons the "cross ofKriževci", finding it derogatory. It is stated that the Town's Mayor, firmly decided to represent the attitudes of the majority of its citizens, should intervene into the discussion of the County's coat of arms. The proposed coat of arms at the time was already a bit more similar to the eventually adopted design.

On 5 January 1996, Glas Podravine published an humorous item (fac-simile) on the roosters and petty quarels between the towns of Koprivnica, Đurđevac and the County (and, of course, on their coat of arms all having roosters), including also several satirical poems. An article in the same issue of Glas Podravine (fac-simile) presents, with photo, an autochthonous type of fowl whoose rooster is "heraldically correct", having golden-yellow feather lined with black.
On 15 March 1996, Glas Podravine published yet an other redesign of Antonio Grgić's proposal (fac-simile) - probably redesigned after the complaints from Križevci - now even more close to the finally adopted design.
The County's coat of arms was eventually adopted on 27 April 1996 (Glas Podravine, 3 May 1996 - fac-simie. The final proposal was subsequently changed, the six-pointed star in one of the cantons being replaced with an Anjou fleur-de-lis, and the arms were adopted; they remained to be approved by the Ministry.
Grgić explained that the yellow and blue rooster is the symbol of the County, even if he would still prefer his proposed, blue and black "aggressive" model symbolizing the struggle against the Ottomans. The top corners include the symbols of the two largest towns in the County. The rooster turned to the right is said to symbolize the positive characteristics of the people. The red and white stripes comes from the alleged arms of Pannonian tribes that Árpád's dynasty took for its arms. The white beams are said to represent rivers in heraldry, here Drava, Komarnica and Glogovnica. The top red field represents the Prekodravlje region, the triple hill in the base stands for the County's south borders - mountains of Kalnik and Bilogora. Grgić also describes the symbolics of the "basic colors" of Pannonia; blue is the colour of Koprivnica. Red satisfies both Koprivnica and Križevci.
The Ministry Commission for Heraldry was not entirely satisfied with the adopted County's coat of arms (Glas Podravine, 9 August 1996 - fac-simile), requiring the chevron to reach the top edge of the shield and to be plain white with a red and golden rooster of red and golden. It was said that Grgić should be helped in the redesign by a member of the Commission, Pr. Zdravko Tišljar. 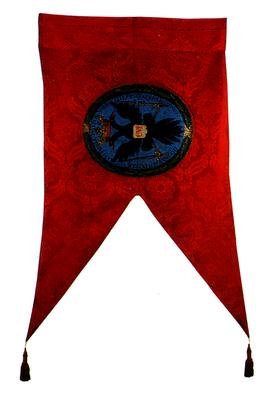 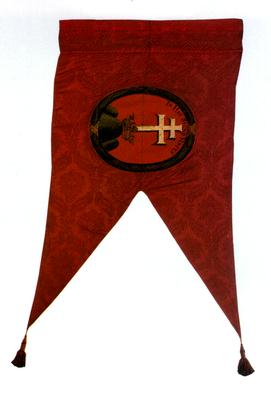 Red silk damask, wood, brass, painted. 90 x 152 cm, staff length 262 cm.
Double-edged cavalry flag with red and blue tassels at the ends. Both sides of the flag field are decorated with painted heraldic emblems.
Obverse: In a red medallion edged with laurel wreath Hungarian (?) coat of arms with the motto "In hoc signo vinces" (Under this sign you will win).
Reverse: In a blue medallion edged with a laurel wreath a crowned double-headed eagle, bearing a white shield with the initials of the ruler Charles VI ("C VI") on his breast. In his talons he holds the ruler's insignias, a sceptre and a sword. Around the laurel wreath the inscription reads "Deo Carolo VI patriae vexilum fidele inclitae nobilitatis comitatus Crisiensis" (To the divine Charles VI the flag of the homeland, the nobility of Križevci County known for their fidelity).
The flagstaff is spirally painted in red and white, and ends in a brass foliate finial with the pierced initials "CC" (Comitatus Crisiensis).
E. Laszowski donated the flag in 1927.

Modern rendition of the flag - Image by Željko Heimer, 24 September 1999

The flag was hoisted on a staff, just as we would expect it, and is not intended for vertical hoisting as one could wrongly assume from the photo!