The Town of Rab (8,065 inhabitants according to the 2001 census, 437 in the village of Rab) is located on the island of the same name near the coast beneath the Velebit mountain range, some 60 km south of Rijeka.
Rab is known in Italian as Arbe, a name originating from the ancient Roman times when the town was established and known as Felix Arba. The attribute "Felix" was given to towns in Roman times as a special gratitude.

The flag is described in Article 10 of the Town Statutes, as follows:

The flag of the Town of Rab is composed of two colors, diagonally divided in the middle: Marian blue and white with the coat of arms of the Town of Rab in the middle bordered with the shield colored golden, with the crown of St. Christopher above from which is hanging the ribbon of glory seven times surrounding a wreath on the one side of olive and on the other of black oak and containing the inscription "Felix Arba".

The symbols were not approved by the Ministry.

The flag (photo, photo) is used in horizontal (photo) and vertical (photo) versions. The flag is divided by a slanted line white-light blue with a wide yellow border all around. The coat of arms (version with ribbons falling from the crown) is set in the centre either on a white oval patch or only edged with a thin white outline.
The flag is also used (photo), horizontally, with the other version of the arms (without ribbons falling from the crown). THe matching vertical version is used as a table flag (photo).

Coat of arms of Rab

Traditional coat of arms of Rab, two versions in actual use - Images by Željko Heimer, 2 August 2016

The coat of arms actually used in the town is described in Article 9 of the Town Statutes, as follows:

The coat of arms of the Town of Rab is of shield shape, with the ratio of its height to the width 1:0.9. In the first [lower] third of the height, there is an eight-pointed star above a crescent moon both being in front three wavy lines symbolizing the sea. The star and the moon are set in the middle vetically. In the right part of the shield, on the top wavy line is the silhouette of the Town of Rab, where the large belfry (St. Mary belfry) is set in the very vertical axis of the shield so that the ball at the top of the belfry is set on the 0.7 of the total height. In the left of the shield is the depiction of St. Christopher, shown from the front in early Romanesque style. The background of the shield is blue, the crescent, wavy lines and the skyline of Rab are silver while the star and the St. Christopher's depiction are golden.

The design that best matches this description includes a golden (yellow) wreath with white olives and acorns, almost entirely encircling the shield, except at the top. There is a bicolour ribbon falling from the "St. Christopher's crown" forming seven loops around the wreath, and bearing the inscription "Felix Arba" in black letters on the central bottom loop.
A variant design has the wreath in natural colours (various shades of green) with black olivesand acorns. The ribbon is layed beneath the shield, golden with black inscription in Roman letters. The stripes of the waves beneath the town are irepresented straight.

As reported by Oštrić [osg02], the coats of arms used since the Middle Ages contain a representation of St. Christopher crossing a river and carrying Baby Jesus, and, in his right hand, a staff with a branched end. A crescent and mullet also appeared regularly.
The white and light blue ribbon certainly refers to the flag of San Marino. The saint who established this republic was born in Rab, where his tradition is well respected.

Oštrić [osg02] shows a modernized version of the coat of arms, designed by the Heraldic Art d.o.o. company, from Rijeka. It is noted in the book, though, that this version is not used, and that the traditional version is still in use.

The ceremonial flag (photos) is a gonfalon with three rectangular tails edged vertically with wide yellow ribbons and a golden fringe allaround, divided diagonally white-blue with the coat of arms (version without ribbons falling from the crown) in the centre. 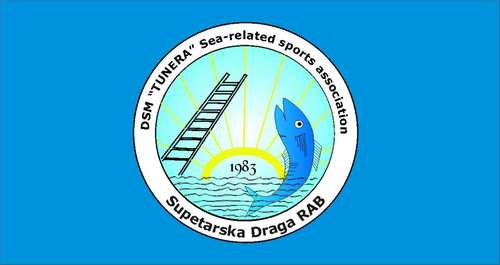 Tunera (website), locted in Supetarska Draga, Municipality of Rab, is an "organization for promotion of all sports and recreational sea activities and the protection of coastal flora and fauna like fishing, diving, sailing, rowing, beach volleyball, ecological actions of brushing the coast and the sea, etc."