Antonio Martins asked: "Shouldn't the shade of red also be lighter, like in the Hungarian national flag?"
The answer is no. This red is the "colour of the International Labour Movement". In Hungarian this red is "vörös", the red of the national flag is "piros".
István Molnár, 4 December 2000

Flaggenbuch [neu92] regarding to Hungary (pages 177 and 178): Commander-in-Chief of the "Stormwache" (Generalkaptänsflagge der Stormwache) - As merchant flag with white border with red and green wolf-teeth. This one has size specification as 100 x 150 cm, with border width 10 cm.
Željko Heimer, 5 November 2001

The word "Strom" means in this context as a river.
Source: https://books.google.de/books/about/Donau_Marineure_und_die_k%c3%b6niglich_ungar.html?id=yGYAfAEACAAJ&redir_esc=y
In the Free State of Danzig there was also a Küsten- und Stromwache (Coast and River Guard). The guard was a branch of the Harbour Authority (Correct spelling: Flagge des Auschusses für den Hafen und die Wasserwege von Danzig)

Adopted: 1919. Abandoned: 1944. The pennant is in shape of a long tricolour triangle.
Željko Heimer 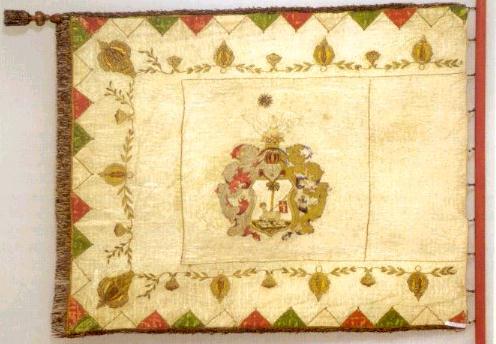 Flag of the Royal Hungarian Bocskay Istva'n 11th Haiduk regiment (Debrecen), 1920:
"After the shock of World War I and the revolutions the society had to face the consequences of the Trianon peace treaty as well. The country that had lost the two thirds of its territory and had become internationally isolated, grasped its glorious past and turned to its symbols. The tendency may be followed in connection with the National Army's and the Royal Hungarian Army's system of emblems.
The troop flag, the basic symbol of the army, was formed considering the traditions. The 1920 flag of the Bocskai István hajdú regiment recalls the Home Guard flags of 1848, even if the embroidered decoration made by patriotic women is unusual. With the 1938 flag decree the spirit of 1848 was restored and Holy Mary replaced on the flags, although tongues of flame were used instead of triangles in the trimming, following the Hungarian method of the l8th century. The claim of territorial revision was suggested by the use of the medium coat of arms of Hungary only however, this was quite obvious for those who were familiar with heraldry."
Source: Sword and Wreath. Hungarian Military Symbols of the Last Millennium. Exhibition Guide. Museum of Military History of Hungary; Budapest
István Molnár, 5 June 2001

Description: "15. Infantry standard M 1938 -  This infantry standard was used in World War II. It was manufactured following the pattern of honvéd flags, however, in place of the trimming triangles (`teeth') there are tongues of flame, which had been applied from the l8th century on. The coat of arms on the flag is the Hungarian national arms used by the army between the two World Wars". Reconstruction based on this picture at <www.geocities.com/zaszlok/Muzeum>.
István Molnár, 24 June 2001

Here is photos of the Military Unit Flag 1938 M type and its reverse side. See also photo of Hungarian military flag (reverse side) and Regent Horthy.
István Molnár, 24 January 2002 and 1 February 2006

The historical war flag of Hungary is the white with red and green wolf-teeth flags charged with the actual CoA and on the other side with St. Mary. Between 1949-1989 the field of the flag was red and the wolfteeth were white and green, and of course the reverse side there was no St. Mary. You could saw on the flag the "Kossuth-CoA" which is the CoA without crown.
István Molnár, 9 November 2000

This image based on a TV program about the Institute and Museum of the Military History. The coat of arms from Željko pages, but I corrected the blue colours. On the description: light blue, like the sky.
Those flags were used in 1949-1956.
István Molnár, 3 December 2000

Today I was in the museum "House of Terror", Budapest (see <www2.terrorhaza.hu>). I found the flag of the 26th infantry regiment (Nagykanizsa) from 1956 with hole.
István Molnár, 21 March 2001

I located a photo of Hungarian People's Republic-era military color at <www.bjkmf.hu>. The text is in Hungarian. A bigger image (144 Kb) is at <www.bjkmf.hu/history/feg.jpg>.
David Fowler, 24 September 1999

This is a guess, but I think it goes about a kind of military music school - or military orchestra or something. Anyway, it is showing how Hungarians maintained their flag tradition in communist times too.
Željko Heimer, 24 September 1999

I am Hungarian and can give information on the native language sources, in this case about the red 1960's military flag fringed in the national colours with the communist emblem in the middle, off of a Hungarian language website. Instead of a music school (probably mistaked the word Muszaki for music) it actually is a technical school, and this particular flag was the adopted flag of the 4th district weapons and military gas equipment plant belonging to this technical/ordnance school. Also the red color most likely signifies the communist era, and at that time all the traditionally white war flags with the red/green fringe were changed to red flags but maintained a nationalistic green and white fringe
Mark Kasaroczky , 3 December 1999

This image based on a TV program about the Institut and Museum of the Military History. The coat of arms from Željko pages, but I corrected the blue colours. On the description: light blue, like the sky.
Those flags were used in 1957-1989.
István Molnár, 3 December 2000

At EBay there is "Rare Hungarian Army Flag - Soviet Era: Here is a rare Hungarian army flag used during the Communist era.  It is double sided with the same image on a heavy cotton with elaborate and carefully stitched embroidery.
Photos here and here.
Rob Raeside, 8 June 2002

It is a red flag with a bordure of alternating white and green isosceles triangles. The coat of arms of the People’s Republic of Hungary is shifted to the hoist. Source: [ped79a]; p.45
Klaus-Michael Schneider, 9 March 2009

It is a red flag with green  triangles in each corner and a bordure of alternating white and green isosceles triangles. The coat of arms of the People’s Republic of Hungary is shifted to the hoist.
Source: [ped79a]; p.45
Klaus-Michael Schneider, 9 March 2009

I am finishing a book that stands on my desk for a long time, I have been reading it a paragraph or two at the time for ages. By the very end of the book I finally found something unexpected. Namely, Barraclough's 1965 edition of the "Flags of the World", on p. 279 mentions a Hungarian ensign that I can't remember seeing anywhere else - at least if I interpret the description correctly:

A crimson flag bearing the emblem at the top of the hoist, and beneath it three narrow horizontal stripes, red over white over green, is used by the River Guard.

The "emblem" is, supposedly the 1957 "Kádar coat of arms" with the tricolour shield, Barraclough describes a few paragraphs above. Well, I am aware (from the above-mentioned page, certainly, quoting Pedersen 1979) that the river fleet used a design equal to the military colors (but maybe for the dimensions), and I believe that this is still practice today (with white ensigns), but it seems that in the late 1950s there was a special flag, I have not seen mentioned anywhere else. Or, is the Barraclough description only a bad interpretation of the Fleet Patrol Flag from Pedersen we show on the abovementioned page?
Zeljko Heimer, 24 December 2018

Flag of one organisaton of the Munkásőrség (1957-1989) ia at <mek.oszk.hu>. Munkásőrség (Magyarországon) was  the paramilitary Workers Militia/Guard.
István Molnár, 26 January 2006

Here is a photo of the symbol of the Munkásőrség taken by me at the Hungarian National Museum.
István Molnár, 20 February 2006

Flags at the Museum of the Hungarian Military History

Here are photos of flags from the 20th century that I took during my visit at the Museum of the Hungarian Military History: