Municipalities (75 settlements, including 20 towns and 1 city):

City (not part of the county):

Other Municipalities in FOTW:

At <www.kovim.hu> you can see the flag of the Hungarian county Békés.
Mello Luchtenberg, 2 August 2002

I wonder if the lights and the camera angle made the flag looks pale and the real colour is darker (purple).
Dov Gutterman, 5 August 2002

The CoA and its original colours on the official page of the county at <www.bekesmegye.hu>.
István Molnár, 5 August 2002 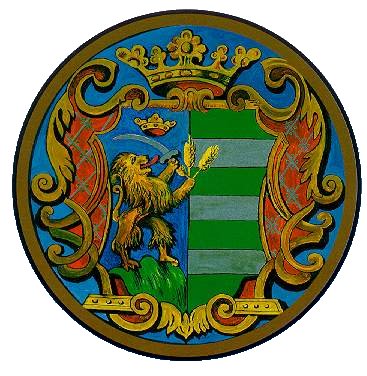 I located this Coat of Arms from 1876 of Békés County in the Kingdom of Hungary at <www.fortunecity.com>.
Jarig Bakker, 23 May 2000