Balatonfüred is a small town and spa in Veszprém County in Hungary at the Lake Balaton. The town has got 13.227 inhabitants (1990 census) nearly all of them are Hungarians. One of the Official Ethnic Minorities of Hungary has got ethnic council in the town: The Gipsy.

From <www.balaton.info.hu>:
"Balatonfüred is the first spa of Hungary, it is the international town of grapes and wine. The town became well-known due to its carbon-dioxide springs and mediterranean-like climate. Balatonfüred existed already in the Roman Ages. Its name was first mentioned in the estate registration of Tihany Abbey in 1211. Owing to the curative effect of the springs near Lake Balaton this settlement was declared a spa in the 1700s. The development of the town started in the 19th century, during the Reformist Age. It became a favourite meeting place of progressive- minded politicians, artists, and the historical and cultural role of the settlement was the most important during this period. We have several monuments from this age."
I found a map from 1994 of Veszprém county, which shows the coat of arms of the city - which is on the flag above! Maybe the communist era coat of arms is used now.
The town was in the Zala County to 1946, in 1954 it was united with Balatonarács village, and in 1971 it became town.
You can see: Lake Balaton, villas, and a neighbouring Abbey of Tihany.
István Molnár, 9 July 2000

A photo about the coat of arms of Balatonfüred at <www.geocities.com/zaszlok/na000807-1.jpg>. In the picture Mr. Orbán, the Prime Minister, on the right side of the picture, gives the Millenium Flag to the Peoples of the Town.
István Molnár, 23 August 2000

Balatonfüred is a popular resort town in Veszprém county, in Hungary with a population of thirteen thousand, situated on the north shore of Lake Balaton. It is considered to be the capital of the Northern lake shore and it has significant yachting life. It is also a favorite location for coarse fishing, carp being the most common catch.
Zoltan Horvath, 19 January 2010

Source: A magyar városok címerei (Coat of Arms of the Hungarian cities and towns); 1975 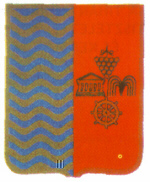 from <www.balaton.net>, located by István Molnár

Decription of coat of arms and some historical background (in English): www.nemzetijelkepek.hu
Zoltan Horvath, 19 January 2010