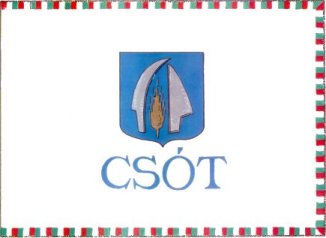 Csót is a village in Veszprém County in Hungary near to Pápa town (14 km to east) on the Little Hungarian Plains. The village has got 1,178 inhabitants (1990 census) nearly all of them are Hungarians. One of the Official Ethnic Minorities of Hungary has got ethnic council in the village: The Gipsy . The flag consists of the Coat of Arms of the village on a white field with red-white-green edge. The first mention of the village was from 1488, In the village is a Baroque Roman Catholic Church (1784), Evangelical Church (18th century), prison and refugee camp (WWI 1915-1923).
István Molnár, 10 July 2000