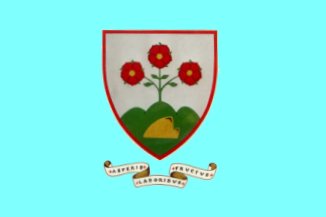 Nagyalásony is a village in Veszprém County in Hungary near to Town of Pápa (15 km to south-west) on the Little Hungarian Plains. The village has got 560 inhabitants (1990 census) all of them are Hungarians. The first mention of the village is from 1240.
The flag was adopted on 1997. On the flag there is the Coat of Arms. The flag is light blue. Ratio of the flag: 2:3. Information and images are from the Community of Nagyalásony Village.
István Molnár, 4 August 2000 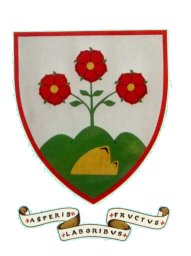 The three hills relate to the Mount Somló, the three red roses from the shield of the Noble Barcza Family relates to the queen of the flowers and the ploughshare relates to the agriculture. Under the shield is a motto from Erasmus: ASPERIS LABORIBUS FRUCTUS.
István Molnár, 4 August 2000