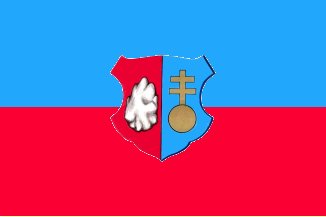 Pápadereske is a small village in Veszprém County in Hungary near to Pápa town (9 km to west) on the Little Hungarian Plains. The village has got only 279 inhabitants (1990 census) all of them are Hungarians.
The flag and the Coat of Arms will be adopted on 29th July 2000. The flag's colours: red and blue.
The Coat of Arms: "In the right red field there is a floating long-shaped grey stone. In the left blue field there is a gold orb, with apostolic cross .
Istvan Molnar, 10 July 2000

The description of the adopted flag (on 30th of July 2000) that was given to me was mistaken and it is blue over red.
Istvan Molnar, 21 August 2000

At <www.geocities.com/zaszlok> there is a picture from the "Naplé" Daily Paper of Veszprém County about the ceremony of the dedication of the flag in Pa'padereske on 31th July 2000.
Istvan Molnar, 23 August 2000 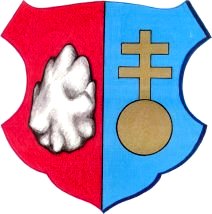