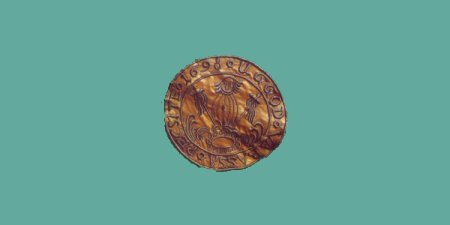 Ugod is a village in Veszprém County in Hungary near to Pápa town (16 km. to east) on the Little Hungarian Plains. The village has got 1.660 inhabitants (1990 census) nearly all of them are Hungarians. One of the Official Ethnic Minorities of Hungary has got ethnic council in the village - The Gipsy
The first mention of the village is from 1332. Between 1527 and 1658 it was a town. From this period is the first known seal came. In the village there is a Baroque Roman Catholic Church (1756-59).
Description of the flag. The gold-coloured first known seal (this is the coat of arms of the village) in a green field. Ratio: 2:1 lying rectangle. The flag adopted in 1995. Ratio of the flag: 2:1
Description of the first known seal: In the center there is Jesus Christ with a crucifix and a flag in his hands, around it there is a text: "UGOD VÁROSSA PECSÉTE 1698" means Seal of the Town of Ugod 1698.
Information from the Community of Ugod Village.
Istvan Molnar, 19 July 2000 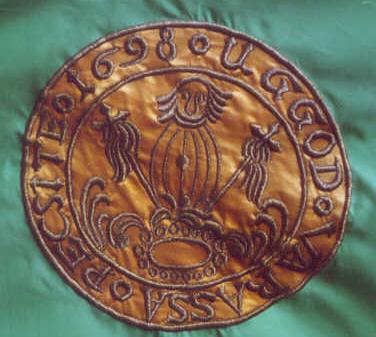