The Starry Plough in Irish life

In 1913 police in Dublin attacked a demonstration by striking workers, killing two people. Trade union leaders then formed a paramilitary organisation, the Irish Citizen Army (ICA) with the intention of providing protection for labour demonstrations. The ICA developed into an armed and uniformed force and in 1914 it adopted the starry plough as its flag - the shade of bluish green used in the flag matched the colour of the ICA's uniform. In 1916 the ICA took part in the rebellion of that year. The original starry plough was captured by British forces but was returned to Ireland in 1966 on the fiftieth anniversary of the rebellion and is now preserved in the National Museum of Ireland, Dublin.

In 1934 the largest trade union, the ITGWU, introduced a simplified version of the starry plough with a sky-blue field, and it rapidly gained acceptance as the flag of the Irish trade union movement and of the movement's political wing, the Labour Party. This flag continues to be used at trade union conferences and marches. Because of the ICA's participation in the rebellion of 1916, the flag is used by republican paramilitary groups. Versions of the starry plough have also been used by a variety of socialist groups. The Labour Party continued to use the 1934 flag until the late 1970s when the field was changed from blue to red. In the late 1980s the red starry plough was in turn replaced by a white flag showing a red rose - an emblem used by many other European socialist parties.
Vincent Morley, 18 March 1997

A 1975 Long Kesh Interment Camp flag signed by 150 prisoners (114 by 178cm., 45 by 70in.) was posted on eBay in February 2010. This is a plain version of that flag (no signatures). It is a light blue flag with seven regular five-pointed stars oriented irregularly and placed to (very) roughly match the Big Dipper asterism (in Ursa Major), in what seems to be a variant of the design above.
António Martins-Tuválkin, 13 February 2010

(obverse) image by Jaume Ollé after a photo by Nozomi Kariyasu, 5 May 2005

The starry plough flag of the Irish Citizen Army, flown in the 1916 rising.
Laurence Jones, 27 December 2005

Use of the Starry Plough in funerals During INLA funerals, the caskets of their dead are draped exclusively in the light blue Starry Plough flag. However, there have been a few exceptions over the years. For example, during the Hunger Strikes in 1981, the INLA members who died on hunger strike had both the Starry Plough flag and the Irish Tricolor draped on their coffins (the Starry Plough flag being given more prominence, of course - most of the time, the Starry Plough would
cover the Orange section of the Tricolor). The reason being was for the INLA to distinguish their members from that of the Provisional IRA, who used the Irish Tricolor exclusively on their coffins.

After the Hunger Strikes, the INLA reverted back to once again solely draping the caskets of their dead with the Starry Plough flag.

In recent times, however, a few veterans of the Irish Republican Socialist Movement/Party (IRSM/IRSP) made special arrangements over what flags would cover their coffins. 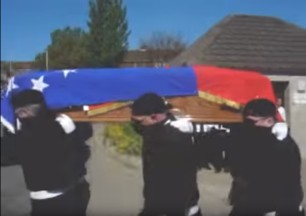 Example #1:
At the funeral of Johnny White in Derry, his casket was draped in both the Starry Plough and the plain Red Flag of International Socialism Each flag shared equal prominence on the coffin. Example #2
For the funeral in Derry (in April 2012) of INLA veteran, Seamus 'Chang' Coyle, a striking Starry Plough with 7 stars on a red background adorned his coffin. However, upon closer inspection, one clearly sees the white stars are not in the same constellation as the normal Starry Plough. Instead, the stars appear to be arranged in a way so as to resemble more or less a Sickle (a common Socialist symbol). This arrangement of the stars was most likely deliberate.
Tom Dolan, 10 March 2016

The Starry Plough in Irish life

The Starry Plough is widely used as a symbol across Ireland.  Here are some links: