A few days ago, the Knesset voted in favour of PM Sharon's disengagement plan. For those who are not updated on Middle East politics, the plan includes evacuating of the Israeli settlements in the Gaza Strip.
While discussing the issue there was a demonstration against the plan. The demonstrators used orange flags charged with blue Magen David and inscriptions above and below it. I noticed two variants: Yehuda/VeHashomron (Judea/and
Simaria) and Gush Qatif/Lanetzkh Nenatzeakh (Qatif Block/Forever we will
win) but there could be also others.
Photos at www.ynet.co.il.
Dov Gutterman, 30 October 2004

In the photo, most demonstrators can be seen wearing orange t-shirts. Does the use of the color orange in both the flag and the clothing have any particular meaning?
Thorsten, 30 October 2004

It is used, probably, because it doesn't represent any political party. I don't know of any other particular meaning.
Dov Gutterman, 30 October 2004

Orange has been chosen as a color symbolizing solidarity with the settlers in Gaza, worn as the color of caps, t-shirts, etc.
Nathan Lamm, 30 October 2004

The settlers who are against PM Sharon plan to evacuate Gaza strip, choose the orange as their color. During a demonstration in Jerusalem yesterday, one could see many national flags with orange instead of white.
Source: www.ynet.co.il
Dov Gutterman, 31 January 2005

One thing I've noticed looking at the crowd was that none of those were actual cloth flags, they all appear to have been printed on some sort of stiff material. I guess it make it easier to display in low wind condition.
Marc Pasquin, 31 January 2005

The flag of such movement was a six-pointed star (Magen David) in blue, two parallel lines also in blue (wider than the lines of the national flag) over an orange background with some words in Hebrew. I saw this flag in some windows, balconies and cars.
The orange pro-settlers groups were distributing orange strips in crossways. They also sell this flags for 5 NIS.
The Hebrew words could be: "Gush Katif" or "Yehuda VeShomeron".
Supporters of the Disengagement Plan started to use blue strips but only few of them used it.
Santiago Tazón, 5 September 2005

I saw a photo by Baz Ratner/AP that made front page in the PUBLICO newspaper at August 14, 2005. It shows a flag which I also saw on TV waved by Gaza settlers, or at least militants against the Gaza retreat.
Modeled after the Israeli national flag, it's orange in colour with two very narrow blue horizontal stripes above and below a Magen David, also blue (and clearly outlined in black in the original photo), and inscriptions in Hebrew above the upper stripe and below the lower stripe. Unfortunately, the photo only captures the central part of the flag and most of the writing becomes unreadable.
Jorge Candeias, 8 January 2007

Jewish settlements have been present in Gaza City for many centuries, which were evacuated following riots in 1929. After the Six-Day War (1967), Jewish communities weren't built in Gaza City, but in Gush Katif in the southwestern part of the Gaza Strip, i.e. Kfar Darom – established in 1946, evacuated in 1948 after an Egyptian attack, resettled in 1970, to be evacuated again in 2005 as part of the withdrawal from the Gaza Strip.

Intention to establish a regional council for the settlements in the Gaza Strip and the Sinai Peninsula (after the occupation of these territories by Israel following the Six-Day War) arose in the early days of the establishment of Nahal settlements in the area, but it fell out of favor after it became apparent that the Ministry of Interior would not be able to work with the council areas and the Ministry of Defense did not want to bear the costs. The Regional Council was established on May 10, 1979 (although another source mentions 1978), by order of the IDF) local commander. By the time "(The) Disengagement Plan", formally the "Disengagement Plan Implementation Law") on February 18, 2005 was passed by the Knesset in 2004, in a Bill originally passed by the Ministry of Justice, and it was ruled that on the day of the evacuation of the last locality from the Gaza Strip, the Regional Council would cease to operate. In practice, the Council ceased to operate on August 15, 2005, with the evacuation of the first locality (August 14 was the deadline for local residents to be in the area although the IDF eventually allowed until August 17 for the
complete evacuation), while evacuation of IDF forces was effective on September 11, 2005 (in Gaza) and on September 22, 2005 (in the West Bank). The evacuation was done by the SELA), Assistance to the Settlers of Gaza and Northern Samaria), which existed in the 2006-2013 period, to oversee the whole operation, including compensation, assistance, relocation, among other activities. The Council at its peak (on the eve of the evacuation) included 8,900 residents in 21 localities. Most of the residents worked in agriculture, industry and education.

Right after the Israeli 2003 elections, a unilateral withdrawal plan was devised by Israeli authorities, that was in line with what was to become the "Roadmap for Peace" a plan to resolve the Israeli–Palestinian conflict proposed by the Quartet on the Middle East (a political and diplomatic group that was established in Madrid in 2002). The final text was released on April 30, 2003. The process reached a deadlock early in phase I and the plan was never implemented. This was in the midst of important geopolitical events such as the Al-Aqsa (Second) Intifada (2000-2005), the War on Terror (2001-onwards) and Operation Defensive Shield (2002).

In December of 2003 the idea of a unilateral withdrawal was being discussed. with some modifications in February and April of 2004, to be up for a vote (some sort of Likud Party internal referendum) on May 2, 2004, in which the Prime Minister's plan for unilateral withdrawal is defeated by a 60%-40% margin.

Protests against the disengagement plan began long before the disengagement plan was approved by the Knesset. Some of the earliest protests were to create a human chain along the 90 km from Gush Katif to Jerusalem, on July 25, 2004, near Tisha B'Av. With the approval of the preparations for the plan in the Knesset on October 26, 2004 by a 67-45 majority vote, 7 abstentions, and 1 member absent (for the proposal, but not for its actual implementation), the wave of protests intensified, and they continued to scale up as the deadline approached. On February 16, 2005 parallel to this, the Parliament approved the Evacuation-Compensation Law with 59 votes in favor, 40 opposed, 5 abstaining, to provide assistance to the would-be displaced communities. A proposed amendment to submit the plan to a referendum was rejected, 29–72. It seems that the protest against the program, which was symbolized in orange, was among the most powerful in the history of Israeli democracy, especially the demonstrations and protests that took place on August 11, 2005, just four days short of the deadline for unilateral withdrawal. One of the most notorious group of protesters to use such color was the Student Cell Against the Disengagement, shortened to Orange cell), which was a right-wing student organization from the Hebrew University of Jerusalem that emerged in 2004. Another relevant organization in the protest was the National Home which is an organization established with the aim of channeling the forces working against the disengagement plan.

Several flags were spotted back then, with the most prominent being the ones representing the settlements in Gush Katif and Samaria and also the Regional Council of Hof Azza (not a government authority, but a popular initiative for self-rule).
Esteban Rivera, 29 July 2020

This cropped image of the original, located here: http://photos1.blogger.com/blogger/3613/1194/1600/muqataflag1.jpg (source, picture taken on October 23, 2005). It is like the Israeli flag, but gold instead of blue (with the Star of David not being the usual outline, but rather fully colored), and black instead of white, as solidarity with the people being displaced (notice that in the picture one can also see the orange protest flag in the background).
Esteban Rivera, 29 July 2020 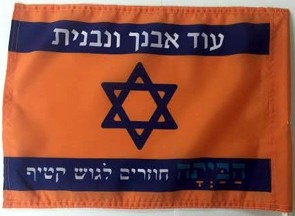 A derivative flag of the 2005 protests, which represents the will of the people to come back to Gaza once again, under a new movement called "HaBayta" ("Going Home") or in English, "Returning to Gush Katif." (dubbed "Friends of Gush Katif") (source:
https://www.ynetnews.com/articles/0,7340,L-4839896,00.html and http://www.gushkatif.co.il/en/product)