The Industrial Local Council of Ramat Hovav is a unique local authority (i.e. municipal entity), being the first local authority under whose jurisdiction there is only an industrial zone. The reason is that the Local Council is situated in the Negev desert, 12 km from the nearest town (Be'er Sheva) and not of a suitable character to be part of the regional council. The Local Council is south of Be'er Sheva just west of Route 40. It was established in 1975 and became a Local Council in 1989. There are 15 plants in its region. According to an e-mail from Mr. Moshe Dayan, council spokesman, the council's logo in its natural colours is charging a hot yellow background with an inscription in bottle green.
Sources: e-mail from Mr. Moshe Dayan, Head of the Public Relations Dept. and Council Spokesman, 24 August 2001.
Dov Gutterman, 31 August 2001 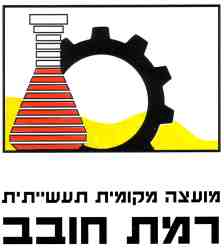