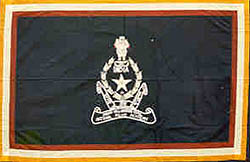 The India Police Service is a branch of the Ministry of Home Affairs, established in its modern format in 1949.

If I understand the Indian police system correctly, each state has a police force that is staffed (at least at the upper levels) by members of the Indian Police Service, which is an all-India service like the Indian Administrative Service, Indian Forest Service, Indian Foreign Service, Indian Railroads Service, etc., all of which are components of the Civil Service of India. The IPS is not a force itself but a service providing personnel to staff the state and all-India forces. So a police officer who is a native of Gujarat, serving for the time being with the Punjab Police, and on his next assignment being promoted and sent to Tamil Nadu. The same system applies to administrative, forest, etc., officers, who rotate among state and union assignments.

A newspaper report from Bristol (UK) reported on 5 September 2003 a visit to the city by Superintendent Mandeep Singh as part of a series of exchanges between police forces. A photo shows acting Assistant Chief Constable of the local Avon & Somerset force handing over what is described as "a commemorative banner" to Supt. Singh. It isn't a flag as it stands, but it looks very much as though it is based on one.

It's hard to count the wavy stripes or to know which color is intended to be the background and which the foreground, but the symbol of Punjab--I think both the Indian and Pakistani portions--is traditionally five wavy lines representing the five rivers after which the state is named (panch- or punj- meaning "five"). I'm not sure one can assume that there is a flag or colour that goes with this banner, although there might be. Presumably the emblem on the banner is the uniform badge of the Punjab Police.