"Sikkim, formerly a protectorate of India, was incorporated as the twenty-second state of the union in May 1975, and the office of the hereditary ruler, the Chogyal, was abolished. Sikkim has, or had, a flag of white with a red border all round, and a yellow Chakra (fimbriated in red) in the centre."

"...the Chakra [is] a Buddhist symbol representing the Law of Dharma, or eternal change." The Chakra on the flag of Sikkim is different then the one on India's flag. It has eight spokes rather than the many spokes on India's, and has an ornate "nub" on the wheel at the head of each spoke.

Don Hagemann, 28 November 1995
[editor's note: The source of this quote is not Barraclough (1971), but probably a later edition of the Carr-Barraclough-Crampton series]

In Flags of Aspirant Peoples the flag of Sikkim is similar to the one above with minor differences in the Chakra.
Ivan Sache, 16 Sep 1999

Sikkim was an antiquated Shangri-La anachronism with a fairly ineffectual Chogyal (Gyalsay Palden Thondup Namgyal) whose only claim to fame was marrying New York socialite Hope Cook. India was never comfortable with this weak link in its China defences. All the same, India's annexation of Sikkim (during the controversial emergency rule of Indira Gandhi) was widely regarded as unnecessarily heavy-handed. India pretty much forced a new constitution on Sikkim, which considerably reduced the Chogyal's powers (he had ruled as a feudal autocrat). There was also a referendum in Sikkim in favour of union with India, (although there is some uncertainty how free the poll was). This was ratified by the 38th amendment to the Indian Constitution (making Sikkim its 22nd state) on 26 April 1975. Unlike the Tibet issue which never dies, I don't think anybody seriously thinks of Sikkim independence.
Todd Mills, 23 September 1997

]
Proportions: 2:3
Source: Flag Institute archive, M. Lupant archive.
Accuracy: reproduced from a drawing of L. Philippe in the M. Lupant collection.
To reduce the file size I had to simplify a little the colors in this file.

]
Proportions: ca. 7:9
Source: "Kosmos Sammelbilder" Memmingen, Germany, 1951
Accuracy: reproduced from a drawing made out from a color photograph of the flag.

The State of Sikkim has an ornate flag of unusual design. It comprises a white field, three edges of which have a triple border, red, white, and blue, the latter being the inner one. An ornamental circular emblem in red is superimposed in the center of the field, and the remaining area has a variety of minor charges in red, blue, green, and yellow. These colors are also used for the decorations on the aforesaid red portion of the triple border.

1914 Design: Blue border with orange and red brick-a-brack narrower borders thereon, with thinner white and red borders towards the inside; inside the panel shows red wheel having shadings (in between the spokes) of red/blue/yellow/blue, while the 2nd (left central) motif had *2* round frame rings. The 6 motifs colored as gold frames, with red/yellow/blue charges.

Pictured in b&w in Barraclough's 1965 edition of his book Flags Of The World, the old 1962-1967 flag design that did belong to Sikkim was an elaborate one. Here's a description of the looks of the 6 'foetal' charges (which look like amoebas or tadpoles of some sort) that are around the Buddhist prayer wheel inside the flag:

E. C. M. Barrclough says in Flags of the World:

The Kingdom Of Sikkim [as it was then] had a flag that flown there from 1962 till 1967; it was in existence for around 5 years. [It was] an ornamental flag of an unusual design. It comprise[d] of a white field, the chief, base, and fly sides of which had the 'triple border' of red (outer)/white/blue (inner). A big red Khorlo prayer wheel is centered thereon, while the remaining panel area was charged with a variety of various religious motifs in shades of red, gold, green, and blue. The thick red portion of the 'triple border' had smaller charges (what looked like crescents and 'ticks') in yellow, green, and blue.

This flag is flying all over Sikkim. State flag is hardly seen. It looks like that this is the de-facto Sikkim flag. SDF is the major, if not the only, political power in the state and took control of the state after its incorporation into India. The flag consists of three equal horizontal stripes of dark blue-yellow-red.
Roman Kogovsek, 6 July 2005

The SDF has a website where one can find its constitution, which states :

3. FLAG
The flag of S.D.F. shall be a tri-colour and of rectangular shape. The colour of the flag shall be Sky Blue at the top, Golden Yellow at the middle and Blood Red at the bottom which will all be of equal size. At the centre of the Flag there shall be an Umbrella printed boldly in black colour.

5. SYMBOLIC MEANING AND SIGNIFICANCE OF THE FLAG
(a) The Sky Blue at the top symbolises determination, progress and national integration.
(b) The Golden Yellow symbolises purity, sacrifice and humanity.
(c) The Blood Red symbolises auspiciousness, social change, courage and liberty.

3. FLAG
The flag of S.D.F. shall be a tri-colour and of rectangular size. The colour of the flag shall be Sky Blue at the top, Golden Yellow at the middle and Blood Red at the bottom which will all be of equal size.

4. SYMBOLIC MEANING AND SIGNIFICANCE OF THE FLAG
(a) The Sky Blue at the top symbolises determination, progress and national integration.
(b) The Golden Yellow symbolises purity, sacrifice and humanity
(c) The Blood Red symbolises auspiciousness, social change, courage and liberty.

The current Constitution was adopted on 1996-08-23, so the sky blue color has been official at least since then. The flag with dark blue color, as described on 2005-07-06, is probably an earlier variant, or maybe the color was darkened due to weather and/or age. However, currently available sources all display a light shade of blue. regarding the other colors, red may vary between R and R+, the former seems to prevail, and yellow may sometimes as dark as Y+, but seems to be Y or close in most of cases.

The umbrella, which is the election symbol of the party, is no longer part of he flag description and plain flags are used sometimes [1, 2]. Flags charged with the umbrella are still used a lot; it may be a simple outline in black [3], sometimes with the party name initials inscribed over the handle, also in black [4]. The canopy of umbrella is frequently shown as painted in flag colors [5, 6], the party name initials being inscribed in black on yellow field [5], or in white on red field [6], sometimes being inscribed again over the canopy, in black [5]. lastly, there are also flags only with the large initials in black on yellow field, without the umbrella [7].

The flag ratio, not specified by the Constitution, varies somewhat; those recorded in use are close to 3:3, 2:3 and 3:5.

Image of flag according to its official description, derived from the image above, which was created by Robert Wheelock.
Sources: 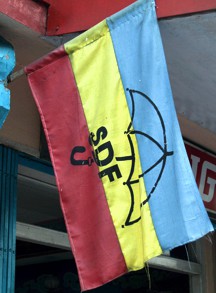 Here is a photo of SDF with an umbrella taken in Sikkim in August 2017 when I visited.
Nozomi Kariyasu, 15 April 2018

Sikkim Krantikari Morcha was founded in 2013, by some dissident members of Sikkim Democratic Front [1]. Its flag is an orange-red-green tricolor; the shades are usually as in the attached image, but may be visibly darker as well. The ratio varies somewhat, but 2:3 seems to be the most frequently used one. In most cases, the flag is plain [2, 3, 4, 5, 6, 7], but there are also the variants with the initials SKM inscribed in white, either horizontally, in center of red field [8, 9], or vertically, one letter in center of each field [10]. Another variant has the full name of the party inscribed in white, one word in center of each field [11]. Finally, the party name may be accompanied with the drawing of table lamp, the party's election symbol since 2014 [12, 13]; on this flag, all charges are depicted in black [14].

I have just found out that this unit of the Indian army received a new flag. It is black and its central emblem is white. It shows two crossed kukri (Nepalese swords). Above them is the Roman number XI in white, because the Sikkim Scouts will be part of the XIth Gorkha Rifles. A white scroll under the kukris bears the name of this unit. At the bottom of the flag, another white panel bears the name "Sikkim Scouts".

Sikkim was a former kingdom and protectorate of the Empire then India. It became an Indian State in 1975. It lays between Nepal to the West, Bhutan to the East, and China (Tibet) to the North. Sikkim has eleven official languages, and although its former rulers shared the same culture with their Tibetan neighbours, now most of the inhabitants are of Nepalese descent.
Sources: http://corecommunique.com/army-vice-chief-unveils-the-flag-of-sikkim-scouts/
Corentin Chamboredon, 2 July 2013 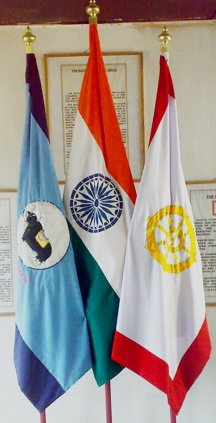 image located by Corentin Chamboredon, 11 May 2017

The flag is a horizontal triband : it has a light blue field, with two dark blue stripes. In the center there is a white disc with black fimbriation. Inside the disc there is a black yak with a yellow and white saddle. There is a line of red text under the disc, which seems to be in English. I think the only word I can see is "GOLF". There might be some other details, but since the flag is folded I can't be sure.

http://armycoursesikkim.golfgogo.com/ tells us that the Yak Environmental Park and Training Area formerly known as Yak Golf Club was relaid in Aug 1978 and the work on the course was completed by early 1979. In the flag the only word I can read is "CLUB" and not "GOLF"
Jaume Ollé, 11 May 2017