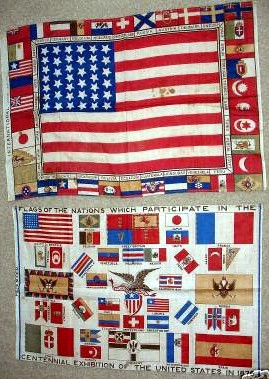 This pair of 1876 Centennial flags show the nations that participated in the Centennial Exhibition of the United States in 1876. I was told these were listed in the Smithsonian Textile Collection but I have not verified this. They measure approximately 25" by 17".
e-Bay posting, 23 January 2008 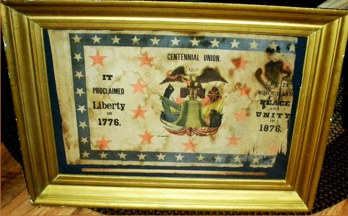 An antique 1876 Philadelphia centennial Exhibition parade flag with original stick was posted on e-Bay. The description read: "Centennial Union - it proclaimed liberty in 1776 let it proclaim peace and unity in 1876".

The great eagle carrying a banner of e pluribus unumin its mouth and the Liberty Bell with various flags in the center including united States, England, France, etc. Marked copyrighted to the bottom left of the Liberty Bell. Inside the border, there are 13 red stars for the original 13 colonies / states. On the outside of the border are 38 stars (part of the stars are lacking on the right side). The flag alone measures around 26.5 inches long in its current state and around 18 inches tall.
Bill Garrison, 23 September 2011