The UINL (Union Internationale du Notariat, International Union of Notaries) is a non-governmental organisation established to promote, co-ordinate and develop the duties and activities of Notaries throughout the world and ensure the standing and independence necessary for optimum service to individuals and society through close collaboration between Chambers of Notaries.
It was founded in 1948 by the representatives of the Chambers of Notaries of the following nineteen countries: Argentina, Belgium, Bolivia, Brazil, Canada, Colombia, Costa Rica, Cuba, Chile, Ecuador, France, Italy, Mexico, Paraguay, Peru, Puerto Rico, Spain, Switzerland and Uruguay. The original statutes, approved in the form of a "Charter" in October 1948 in what was known as the International Congress of Latin Notaries and idea that emerfged mainly from Argentinian Notary José Negri the idea was performed and became reality, with the help of Spanish Notary Rafael Nuñez Lagos. The statutes were officially adopted by the Congress held in Madrid on 21st October 1950.
The aims of the Union are :
- The promotion and application of the fundamental principles of the Latin-type notarial system, and principles of notarial ethics, as approved by the General Meeting of Member Chambers of Notaries;
- Representation of Chambers of Notaries before international organisations
- Collaboration with and participation in activities of international organisations
- Collaboration with national organizations, more particularly with notarial organizations
- The study of law in the field of notarial practice and collaborationin matters relating to its development, in accordance with the fundamental principles of Latin-type Notaries
- The study and systematic compilation of legislation relating to Notaries
- The promotion of international congresses and support for professional meetings which go beyond purely national interests
- Included amongst the objectives of the Union is the establishment of relationships with:
Developing Chambers of Notaries and with Notaries in countries which have no notarial organisation to assist their development and organisation with a view to their joining the Union;
Notarial organisations within legal systems which are eligible to join the notarial system;
Organisations which are not part of the notarial system in order to collaborate with them in areas of common interest.

The flag was first spotted on March 24, 2012 and can be seen here. (0:27, the flag is the third flag froml left to right). The flag is a white horizontal flag featuring the coat of arms in color. The coat of arms's motto is: "lex est cuodqumque notamus". However there's a variant of the coat of arms, which I spotted on Medellín, Colombia, outside a Notary office affiliated to the UINL.
Esteban Rivera, 16 April 2012 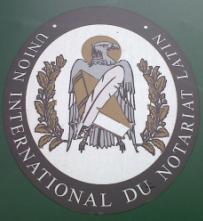