The Stoke Mandeville Games, first held in 1948 and continues today as the International Wheelchair and Amputee Sports World Games, were the forerunner of the Paralympic Games.
The flag of the Stoke Mandeville Games was in the form of green-red-green horizontal stripes, with stylized white initials 'SMG' at the centre, surrounded by five-pointed white stars, the number of which varied over time, presumably to reflect the number of participating nations.
Miles Li, 31 August 2012

Do we have a source for the colour of the stars? At http://thepeacemuseumuk.wordpress.com/2011/11/30/9-paralympic-games/ is a photograph of an SMG cloth that may or may not be a flag, but which has the stars in a colour different from that of the letters. Click for a large image. And I do mean large! I enclose a cropped and scaled version of the design. How great was the variation in stars, BTW; so far I've only seen six stars. SMG cloth, hoisted along its top edge.
Peter Hans van den Muijzenberg, 08 January 2013

A colour photo from 1953 showed the stars were indeed white.  As seen on the abovementioned photo, the 1953 games flag had six stars. The 1954 games had 14 participating nations, and accordingly the flag had 14 stars: http://www.flickr.com/photos/wheelappeal/6985510929/in/photostream/
But there's more. The version used in the 1963 games had no star; instead a globe was placed at the centre, and the letters 'SMG' at its sides and bottom:
http://www.flickr.com/photos/wheelappeal/6985497243/in/photostream/
All the previous versions were shown held up as banners, thus arguably not 'real' flags, but an undated photo here showed yet another version flown on a proper flagpole. It was the same as the version used in 1963, but with three interlocking wheelchair wheels (one above two) in the canton:
http://www.flickr.com/photos/wheelappeal/6839393210/in/photostream/
Note that the globe was probably in full colours, and the wheels were in white, as per the 1964 games brochure:
http://www.dinf.ne.jp/doc/japanese/resource/handicap/bok001/bok001g/i001g00.jpg
Miles Li, 08 January 2013

The first edition of the Games, held in 1948 in London, were to be known as "Stoke Mandeville Games for the Paralyzed" or "1948 Wheelchair Games" because its first participants were on wheelchairs, and were intended to coincide with the 1948 Summer Olympics. Hence, the games were known colloquially as the "Wheelchair Games". It has since then, been an event held on an annual basis. From 1949 until 1951 they were called "Stoke Mandeville Games" and for the 1952 edition, when Dutch ex-servicemen joined, it was called the "1st International Stoke Mandeville Games". From then on, up until 1960, the "9th International Stoke Mandeville Games" (later known as the 1st Paralympic Games) were held for the first time outside the UK, this time, in Rome, Italy, parallel to the 1960 Summer Olympics. From here onwards, it was decided that every four years another Paralympic Games would take place, to coincide with the Summer Olympic calendar, although the same venue would not be used up until 1988, when both editions, the Seoul 1988 Summer Olympics and the 1988 Summer Paralympics, were held in Seoul, South Korea.

From 1960 up to and including 1972, the Paralympic Games were organized solely under the aegis of the International Stoke Mandeville Games Federation, ISMGF (later International Stoke Mandeville Wheelchair Sports Federation, ISMWSF and currently the International Wheelchair and Amputee Sports, IWAS) and the Presidency of their Founder, Professor Sir Ludwig Guttmann. They concerned only spinal cord paralysed wheelchair athletes at the beginning, which eventually grew to encompass other disability groups.

The first time that a separate event was held, that is the Stoke Mandeville Games on one side and the Paralympics on the other, was in 1976, when the "5th Summer Paralympics" took place in Toronto, Canada, having also for the first time athletes with different disabilities and not exclusively on wheelchairs. This year also marked the 1st Winter Paralympic Games, held in Örnsköldsvik, Aangermanland, Sweden. It was also the the first time. The Winter Games were celebrated every four years on the same year as their Summer counterpart, just as the Olympics were. 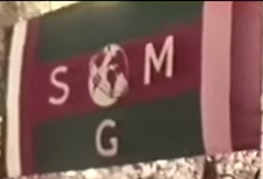 There's a variant of the already reported Stoke Mandeville Games flag. It is a horizontal flag, with three equally divided horizontal stripes, the top and bottom being red and the middle stripe being green, with a globe in the middle surrounded by a wheel of a wheelchair, and the initials "S" to the left of the globe, and "M" to the right, both on the middle stripe, and below the initial "G", all in white capitals, standing for Stoke Mandeville Games, as seen here (https://www.paralympic.org/sites/default/files/styles/mainpicture_612/public/images/20150303/150303125309785_Payne_0007.jpg?itok=kUGmSbi_ , source: https://www.paralympic.org/medals ) and here: https://media.gettyimages.com/photos/the-various-international-teams-during-the-opening-ceremony-of-the-picture-id149678345
(source: https://www.gettyimages.com/detail/news-photo/the-various-international-teams-during-the-opening-ceremony-news-photo/149678345#/the-various-international-teams-during-the-opening-ceremony-of-the-picture-id149678345). The picture caption reads: "The various international teams during the opening ceremony of the Summer Paralympic Games in Tokyo, 3rd November 1964." This was first mentioned by Miles Li, on January 8, 2013, indicating that previous to the 1964 Games, the SMG banners were held up, thus arguably not 'real' flags and that the first real flag was then flown (with almost the same design as previous banners) in 1964. I have not found any sources that indicate when the first SMG flag was flown, nor when did it change from the first version with white stars, to the second version without stars.
Esteban Rivera, 6 August 2018