For the قوات خاصة (English: Special Forces) (also known as قوات خاصة عراقية (English: Iraqi Special Forces)) in modern times in the period before, that is 1950's-2000's (a period in which the Army went under the name Iraqi Army, then Royal Iraqi Army and again Iraqi Army or Army of Iraq, the parent organization of the Special Forces) here's a brief historical background: "Special operations troops in the old Iraqi Army were first established when then Colonel Khaleel Jassim Al-Dabbagh built the first القوات الخاصة الملكية (English: (Iraq) Royal Special Forces) under the name of قوات الملكة عالية (English: Queen Alia Forces) in the mid-1950s. It consisted of Sunni and Shia Arabs, as well as other components of the Iraqi population. They were mainly used on an emergency basis to carry out special missions inside of Iraq and outside when the country was at war. They were also established with the purpose of engaging in the continuous skirmishes against the Kurd forces in the north, mainly under the Kurdistan Democratic Party (KDP).
Source: https://en.wikipedia.org/wiki/Iraqi_Special_Operations_Forces#History , https://ar.wikipedia.org/ and https://www.facebook.com/Armyofiraq/
Esteban Rivera, 8 September 2020

The flag is the coat of arms in the middle of a maroon horizontal flag.
Esteban Rivera, 17 June 2014 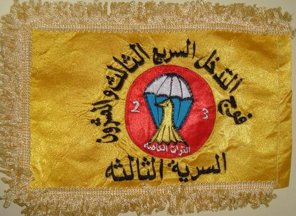