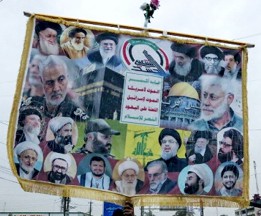 A vexillum seen at a Jan. 1, 2022 rally in Baghdad, Iraq, that commemorated the Jan. 1, 2020 U.S. drone attack that killed Iran general "Qassim Soleimani" (who was directing the "Al-Quds" militia forces in Iraq) and Iraq "Abu Mahdi al-Muhandis", deputy commander of the Iran-backed PMF ex-paramilitary militias in Iraq. Stretching the definition of a "vexillum" a little perhaps, but due to this "placard/banner" having yellow-golden fringe on it, I think qualifies it as a vexillum for Iraq. It certainly has a smorgasbord of "themes" in it: at the top row in the middle is the logo of the Iraqi "Popular Mobilization Forces" (PMF) or "al-Hashed al-Shaab"; below it is the banner/logo/flag of the Yemen "Houthi" militia, and below it is the yellow-field logo/flag of Hezbollah. When looking at this vexillum, to the right of the yellow Hezbollah flag is an image of the Iraq politician: Muqtada al-Sadr. Just below al-Sar's right shoulder, is the gray-bearded Irani nuclear physicist, Moshen Fakhrizdeh, who was assassinated on Nov. 27, 2020 by Israel. To the left of the white Houthi logo/flag is the Muslim holy shrine: the Kabba, and to its left is an image of the assassinated Iran general Qassim Soleimani. To the right of the Houthi logo/flag is the "Golden Dome" or "Dome of the Rock" (al-Haram al-Sakhra) on the "Temple Mount" or the "Noble Sanctuary" (al-Haram al-Sharif) in Jerusalem, and to its right is an image of the co-assassinated PMF commander al-Muhandis. At top, to the left of the PMF logo/flag is Iran's current Supreme Leader: Hosseini Khamenei, and to his left is Iran's first Supreme Leader: Ayatollah Musavi Khomeini. Along with a plethora of other Shiite-Muslim personalities.
Source: https://www.timesofisrael.com/hundreds-trample-on-israel-us-flags-at-baghdad-rally-marking-soleimanis-death/?utm_source=The+Daily+Edition&utm_campaign=daily-edition-2022-01-01&utm_medium=email 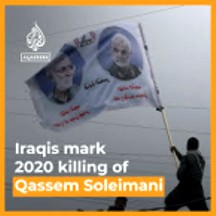 Source: https://m.facebook.com/watch/?v=870293860315655&_rdr
A white-field memorial flag bearing images of Iraq PMF (Popular Mobilization Forces) militia Commander al-Muhandis and Iran Gen. Q. Soleimani, both killed in a U.S. airstrike on 3 Jan 2020, with the PMF logo atop; c. 2 Jan 2022. The flag was carried during a demonstration demanding that all U.S. and assisting foreign troops be withdrawn from Iraq.
Bill Garrison, 29 May 2022

Caption: This is a special mourning flag covering the casket allegedly containing the scant remains of Iranian Gen. Qasem Soleimani, who was killed in a U.S.-led airstrike outside Baghdad, Iraq, on 3 Jan. 2020. Because Gen. Soleimani was a jihad-"striver" killed in "combat" while striving to support the overall Shia-Muslim religious cause, he is considered to be a "martyr" for his Shia-Muslim faith. After a large memorial service in Najaf, Iraq, his flag-draped coffin was paraded through Najaf, before taken to Iran for burial in Tehran, a week later. According to my Iraqi source, "These flags are made specially for these kinds of [funeral] occasions to symbolize the honor of martyrium [martyrdom] for the sake of Iraq and Imam Ali's Shia-Muslim sect." If this flag could be fully seen, it looks like the current national flag of Iraq, and at the left side of the middle white stripe there is a logo referring to Imam Ali and (in Arabic) "the Aliwi sacred shrine" [where the Shia Imam Ali is believed to be buried] in Najaf, Iraq. Briefly, the Alawites are an offshoot of Shia Islam who revere Ali, the Muslim Prophet Mohammed's cousin and son-in-law. At the time of his death, Gen. Soleimani was the commanding general of the Iranian-based "Quds Force", a sub-unit of the "Iranian Revolutionay Guards Corps" (IRGC), and he also coordinated the Shia-Muslim "Popular Mobilization Forces" (PMF) inside Iraq. The Shia-Muslim government of Iran supports the Shia-Muslim government of Iraq. As my Iraqi source noted: "this should not be considered as a standard flag of a country, group or whatsoever." Nonetheless, I thought this might be an interesting example of a printed Shia-Muslim jihad-memorial/mourning flag, that may be available at the shrine for other martyrs. Because the logo/slogan is printed "sideways" on the white stripe, it is obvious that it is meant to be read "head on" when looking at a casket, rather than being flown like a typical flag. {Photos of Gen. Soleimani burial in Iran show the Iranian national flag covering his casket -- not this "flag".}