Bank Mellat (بانک ملت) was formed on July 20 (another source mentions December 20), 1980, according to a resolution of the General Assembly of Banks No. 38077 of Companies Registry Administration, by article 17 of Banks Affairs Administration Law, on the merger of ten banking institutions (Tehran, Dariush, International Iran, Civil, Iran Insurance, Iran and Arab, Pars, Cooperative and Distribution Credits, Foreign Trade and Farhangians) registered in the Companies Registration Office, enacted the very same day. Hence, Bank Pars was merged into Bank Mellat. According to the Extraordinary General Assembly of Banks, dated April 17, 1987 and the approval of the Honorable Board of Ministers (No. 68985 / T 37925 dated August 2, 1986, the additional source mentioned above mentions another date, July 22, 1980), the legal personality of Bank Mellat became a public company (State owned). The bank became private in 2005"
Sources: https://bankmellat.ir/history.aspx  and https://fa.wikipedia.org/wiki
Esteban Rivera, 22 September 2020

The bank's flag features a white horizontal background with the bank's logo (https://en.wikipedia.org/wiki/File:Bank_Mellat_logo.svg) in the middle, and below the banks' name in black Farsi language (بانک ملت‎, English: People's Bank) and below that its transliteration into English, "Bank Mellat" and below a red streamline.
Source: https://fastly.4sqi.net, source: https://es.foursquare.com/v/mellat-bank).
Esteban Rivera, 4 October 2020 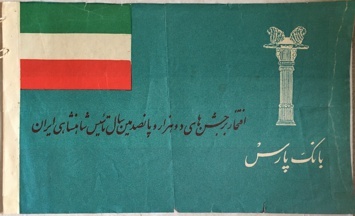 The flag is a commemorative flag issued in 1971 by Bank of Persia (بانک پارس) in support of the above mentioned event. It follows the same pattern of official flags in the Region (also adopted by most Arabic countries, as well as Iran) in the sense that it is a horizontal flag, which portrays the country's flag in the canton and the name and logo of the institution on the fly, over a plain pale blue color background, the background color being that of the Pahlavi Dynasty. Notice the white two-headed lion column featured on the fly, a symbol common in Persepolis, which is the logo of the bank, as seen here: https://fa.wikipedia.org (source: https://fa.wikipedia.org).
Ahmad Sameeh Massalha, 22 September 2020

For more details on the 2,500-year celebration of the Persian Empire see The Iranian