Pasdaran - Army of the Guardians of the Islamic Revolution, Iran

An Iran "Pasdaran" (or Iran Revolutionary Guards) flag. It is the similar to Iran Army (Basij) flag. The difference between these 2 flags is that the Basij flag includes the wording of "NIROUYE MOGHAVEMATE BASIJ-E SEPAHE PASDARAN" at the bottom of the Pasdaran emblem. That makes the flag special for the Basij as the Basijis work under supervision of the Pasdaran.
Bill Garrison, 31 August 2006

The Pasdaran (Islamic Revolutionary Guards Corps) are a parallel military outside the regular armed forces. The Basij is a paramilitary force (militia-like) under the command of the Pasdaran. For more information see see http://en.wikipedia.org/wiki/Islamic_Revolutionary_Guards_Corps.
M. Schmöger, 17 September 2006

The Army of the Guardians of the Islamic Revolution (Persian: سپاه پاسداران انقلاب اسلامی ‎ / Sepāh-e Pāsdārān-e Enqelāb-e Eslāmi), often called Revolutionary Guards, is a branch of Iran's military, founded after the Iranian revolution on 5 May 1979. Whereas the regular military (artesh) defends Iran's borders and maintains internal order, according to the Iranian constitution, the Revolutionary Guard (pasdaran) is intended to protect the country's Islamic system. The Revolutionary Guards state that their role in protecting the Islamic system is preventing foreign interference as well as coups by the military or "deviant movements". The Revolutionary Guards have roughly 125,000 military personnel including ground, aerospace and naval forces. Its naval forces are now the primary forces tasked with operational control of the Persian Gulf. 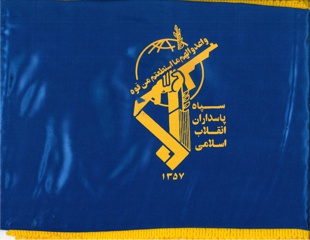 This flag for the "Armored units" of the Islamic Revolutionary Guard Corps (IRGC) is similar to the main, blue IRGC flag, but this has an obvious "tank" design incorporated into the IRGC logo upon a green background. The IRGC military system (offensive) while similar is separate from the ARTESH military system (defensive).
Bill Garrison, 1 October 2020 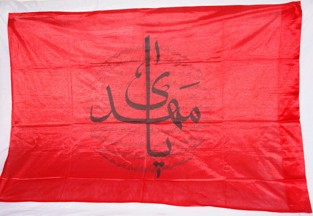 On http://www.basij.ir/parameters/basij/modules/cdk/upload/content/news/13476/sazanegi.jpg (archived here) is a picture of a blue flag with the logo shown here, as the flag of the Iranian Basij Sazandegi.
Bill Garrison, 20 December 2016 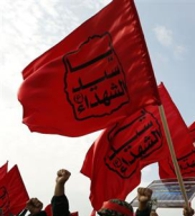 Caption; Iran's volunteer forces, Basij, are holding the second day of major military drills on November 20, 2015 on the outskirts of the central city of Qom. ©IRNA
Bill Garrison, 5 October 2019 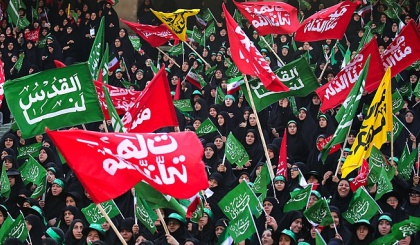 In the mid-1990s the Iranian government began militia training for middle and high-school students. These students were being trained to serve after high school in the national Basij militia (which supervised the student's training). The middle-school students (12-14 year olds) served in the "Dynamic Resistance" (Pooyandegan" or "Puyandegan") units with the red flag ("Puyandegan" is on the bottom line). The high-school students (15-18 year olds) served in the "Pioneer Resistance" ("Pishgaman") units with the blue flag ("Pishgaman" is on the bottom line). Collectively, these students served in the "Scouts Forces" of the Basij. On the left-side of both flags is a logo with an ink-pen atop a book, with tulips symbolizing the martyrs of Iran.
Bill Garrison, 30 September 2019 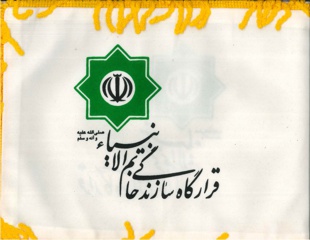 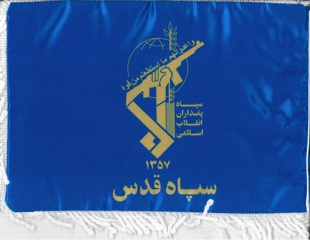 The Quds Force (نیروی قدس), is a branch of Iran's Islamic Revolutionary Guard Corps (IRGC). It is considered the elite clandestine wing of the Guard and specialize in unconventional warfare and military intelligence operations primarily in foreign countries. It is sometimes referred to as the Qods Force, or Jerusalem Force. It was organized shortly after the Iranian Revolution (1978-79), and its activities have centered around organizing, supporting, and sometimes leading local forces abroad.
It has been active throughout many countries in the Middle East, including Hezbollah, Hamas, the Palestinian Islamic Jihad, Yemeni Houthis, and Shia militias in Iraq, Syria, and Afghanistan.
Reportedly the Quds Force reports directly to the Supreme Leader of Iran, Ayatollah Khamenei. The U.S. Secretary of State designated the Islamic Revolutionary Guard Corps and Quds Force as a Foreign Terrorist Organizations (FTO) in 2019 based on their “...continued support to and engagement in terrorist activity around the world.”
Pete Loeser, 25 May 2022 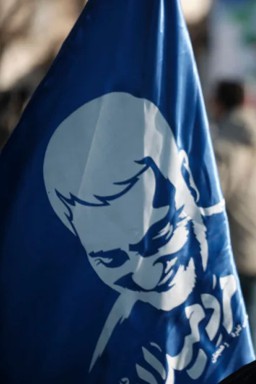 From https://time.com/5937567/iran-revolutionary-guard-ideology/
An Iranian boy holds a blue-field flag with a white-colored portrait of the former Iranian commander of the "Islamic Revolutionary Guard Corps (IRGC) Quds Force": General Qasem Soleimani, during a rally in Tehran to commemorate the 42nd Victory anniversary of the Islamic Revolution, on Feb. 10, 2021.
Morteza Nikoubazl-NurPhoto via Getty Images
Bill Garrison, 7 October 2021

Of particular interest is that in the bottom-left corner side of middle green flag it has an Iranian Pasdaran militia logo. I believe it was printed on the flag when the flag was originally made, as the Pasdaran-logo image is in black-and-white which matches the overall white-black border frame on the flag. Also, I have never seen a black-white Pasdaran patch by itself.
Bill Garrison, 14 November 2019