The gonfalone appears on a Premio Artiglio page. Under the artificial light, the cloth looks rather garish, and there is an ornamental bow added in the national colours.
Explanation (translated from Italian from <www.radicedidue.com>):
"Obverse: blue drape surrounded by two friezes and ending at the bottom with six tails, crossed over with an ivory-white band with olive twigs.
In the center, on a white field, the emblem of the province is surrounded by a wreath of laurel.
Reverse: white-edged ivory blue drape, crossed by festoons of ears of wheat and charges with the arms ofthe communities of Viareggio, Pietrasanta, Lucca, Castelnuovo Garfagnana, Barga in Camaiore" (Decree of the President of the Republic on 30 December 1956).
The panther rampant in the arms is a clear reminder of the same animal that, from the fourteenth century, appeared to support the city."
Confirmation is found in the official description (in Italian) at Statutes, Article 3, points 2-5.
Jan Mertens and Dov Gutterman, 30 July 2002 and 1 March 2008 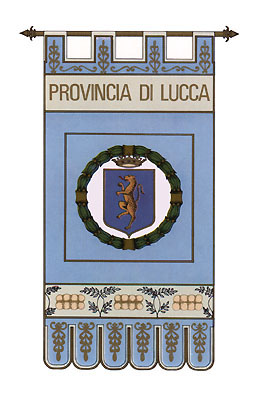 Here is my photography of the gonfalone of Lucca.
M. Schmöger, 5 March 2008