The regional law 30 August 1976 decide to create a emblem. The winner was similar emblem as the current one but with three fivepointed stars in the diagonal stripe. But this design was modified and the three stars were supressed. The modified emblem should be added to a blue gonfanon (with the words Regione Molise in the lower part of the embles, in semicircular form) but seems that this gonfanon never was manufactured.
Jaume Olle, 25 September 1998 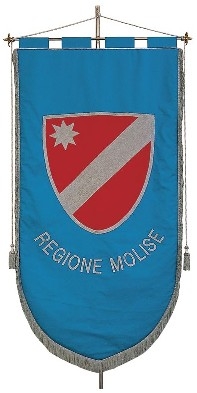 The gonfalone can be seen at <lnx.altromolise.it>: Sky blue field, arms as shown here, and semicircular legend below the arms ‘REGIONE MOLISE’ in silver letters. Silver fringe.
The manufacturer presents one at <www.tecnografica3d.it>.
Jan Mertens, 5 August 2008