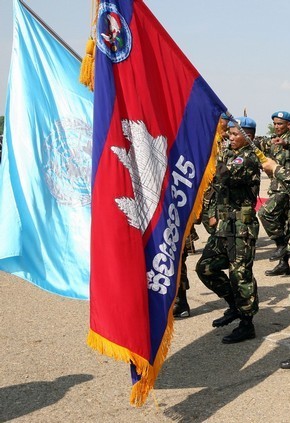 Caption: "President Choummaly Sayasone stands in front of Cambodia's flag during a a wreath-laying ceremony at Independent Monument in Phnom Penh August 6, 2007."

...both of which sound like pretty official occasions. At first glance I thought these were red-blue bicolors, but a more careful look revealed a small corner of the Angkor Wat in the top red field, making it a very large KH national flag, only with the addition of lettering. I can't read it, obviously, but it doesn't seem to be the country name or national motto.

...perhaps an army color? A full view is visible in the site header at www.army.gov.kh.
Eugene Ipavec, 2 October 2007, with amendments 3 September 2008

This flag follows the same pattern as the already two flags reported above, where there's a basic Cambodian flag pattern, followed by golden fringes on the edges, a badge (coat of arms) of the official institution on the hoist (usually Police and Military coats of arms).

It is my conclusion then, that Police and Military Unit flags are the ones we feature on this section