Two designs have been reported for Ocean Island or Banabe flags.

This design comes from Volume 1 Number 3 of the Bulletin of the Hungarian Vexillological Association "Flagworld" page 32 by Mr Laszlo Balogh. He describes a flag thus. Draw a rectangle, put throughout a white saltire. The top and bottom triangles are blue and the left and right triangles are red. [Editor's note: this is the 1976 flag of Seychelles.]

The second flag for Ocean Island I know of is a field of medium blue, with a white central disc. Inside the white disc is a central emblem coloured gold, of a stylized silhouette map of Ocean Island itself. Laid over this and extending over the circle is a black frigate bird in flight.
Paul Lindsay, 21 September 1996

I received information about Banaban flags from Stacey M. King (I posted him my images of two Banaban flags):

"We are not aware where you got such information but Rabi Holdings Company has been out of business for many years and the logo seen on kir_ban2.gif has been adapted today as an official logo with more drawings and a motto added. It is a LOGO ONLY and in no way is used as a flag. The Banabans on Rabi island fly the Fiji flag and in Banaba fly the Kiribati flag for all official occasions.

The Banabans do not have independence as this was denied to them in 1980 when Kiribati became a Republic. I am a Banaban who is recognised as an official historian for my people. I have never seen either of these two flags and they are not recognised in anyway by our people."

When I posted information (from Flag Bulletin) he replied:

"The information you have seen would be all dating back to late 1970's and 1980 when we sued the UK Government in the longest Civil Court Case in history. We also went to Court over the fight for Independence and to the UN. All this was to no avail as UK Government left the final decision regarding our independence to the Republic of Kiribati, or the Gilbert Island Group as it was then known.

So this would be where you have probably found information on proposed flags etc. The problem is - that the issue of our relationship with the Kiribati Government is very sensitive and it is only over the past year or two that we are now trying to work together for the betterment of our people. The Banabans, including myself, see the role of the Kiribati Government and the issue of Independence for our homeland of Banaba in the Central Pacific as still a HOT issue.

Even with these feelings buried deep in our hearts we do not recognise having our own flag due to the fact we only hold community status and the fact our communities on Rabi and Banaba are split under 2 nations. This is why the publishing of the 2 flags you have would be misrepresenting the status of people. Before Kiribati independence from the British Colony of Gilbert & Ellice Group we have a Colonial flag presenting all the G & E Group, not just the Banaban people. The Government Headquarters for the G&E Group were located prewar on Banaba or Ocean Island as it was then known, and moved to Tarawa post war."

According to Ken Sigrah, historian of the Banaban Heritage Society, none of the reported designs has ever been used by Banabans as a national flag. The second one was made from the logo of a former company called Rabi Holdings. At the end of British rule over the Gilbert Islands (1979), many Banabans wanted to become independent from Kiribati. Even those who still keep some hopes about future nationhood seem to be acknowledging only two current flags for Banabans, namely the Kiribati flag (for Banaba proper) and the Fijian flag (for Rabi Island, where a number of Banabans have settled).
Thanh-Tâm Lê, 14 December 1998 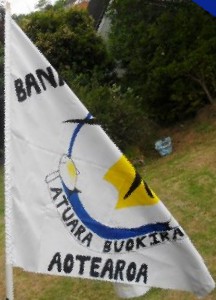 Source not provided. The flag appears to bear the same central logo as that presented above. The question was raised if this might be a group in New Zealand (the flag does state "Aotearoa" on it).
Rob Raeside, 28 March 2013

Concerning the i-Kiribati flag marked "Aotearoa", though I cannot make an identification of it, I can perhaps give a further piece of information and make a guess as to what it is. The motto shown on the flag, "Atuara buokira" is an i-Kiribati phrase meaning "our God, our help", and is the motto of the Banabe council (see http://books.google.co.nz/books?id=VbNh_ewi6zsC&pg=PA126&lpg=PA126&dq=atuara+buokira&source=bl&ots=U8vEwGNhPJ&sig=eYbNbFHyFGVCLHzpe1qYPZdd5SE&hl=en&sa=X&ei=wVNEVKzGC4v38QWHv4HwBQ&ved=0CB4Q6AEwAA#v=onepage&q=atuara%20buokira&f=false). It is quite possible this is the flag of a cultural group representing Banabe at one of New Zealand's annual Pasifika cultural festivals, which draw together cultural groups from throughout Oceania and have been held in Auckland every year since about 1990. Here is a short article on this year's festival http://www.nzherald.co.nz/nz/news/article.cfm?c_id=1&objectid=11215292.
James Dignan, 19 October 2014

The phrase "our God, our help" is commonly seen on anything Banaba/e. I've also seen it on a sport uniform somewhere. Can I suggest the simpler option that this is the flag of a Banaban Community of/in New Zealand?
Peter Hans van den Muijzenberg, 11 November 2014