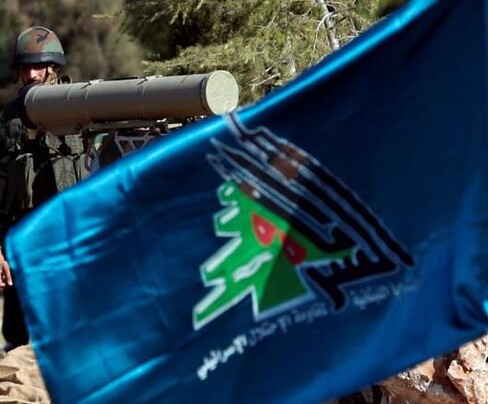 I assume the blue flag in this image and this image is the flag of a Lebanese guerrilla [organization], but not one I know of. I cannot determine what guerrilla [group] is it. I found these images referenced as "SARAIA." In my opinion, the use of the Lebanese national flag aside with this flag, and the biblical origin of the name "Saraia" is a clue that could suggest any of the Christian Lebanese paramilitary organisations, even if I found these images looking around Hezbollah stuff.
Santiago Tazón, 03 Dec 2001

The Saraya, whose correct name is Saraya al Moqawama el Lebnaneya, meaning "The Lebanese Resistance Brigades" is a subgroup of Hizbollah. Hizbollah only allows a select few into its ranks who have to meet certain criteria, among which that they have to belong to the Shi'ite sect of Islam. The reason being that Hizbollah's ideology has its roots in Shi'ite beliefs. During the decade of the 1990's, Hizbollah was gaining popularity within the Lebanese community due to its struggle with Israel to free the Lebanese occupied territories. Many non-Shi'ite Lebanese approached Hizbollah wishing to enroll so that they could help in the fight against Israel. Hizbollah then established the Saraya as a group of non-Shi'ite Lebanese – Christians, Druze, and Sunni Muslims – who were trained by qualified Hizbollah personnel, and were also funded and directed by Hizbollah's main command. I am not sure of the year of establishment of these brigades but I would doubt [sic – "guess"?] it was about 1997-1998. Since the withdrawal of Israel from southern Lebanon (May 2000), I have not heard of the group. I really doubt that it still exists and most probably it does not.
Anonymous, 26 Nov 2005

This is the flag of السرايا اللبنانية (English: The Lebanese Brigades, other sources mention Lebanese Resistance Brigades). "Hizb Allah’s Lebanese Resistance Brigades – commonly referred to as the سرايا (English: Saraya) (Brigades) – in Lebanon" and it is widely assumed that they were established on November 3, 1997, although other sources mention 1990, 2004 and even 2009. Its first military action was carried out on March 14, 1998. It is a structure separated from Hezbollah's political party, كتلة الوفاء للمقاومة‎ (English: Loyalty block to resistance ). It is considered as the first non-denominational Lebanese paramilitary group affiliated with Hezbollah.

Its flag is a horizontal blue background with the emblem (which features one AK-47 with bayonet along another AK-47 assault rifle, and the last one features two dripping blood drops over a covered green cedar) in the middle. 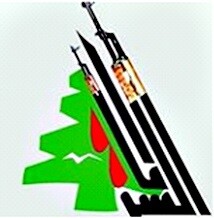