19th regiment of Lithuanian uhlans (19-as Lietuvos ulonu pulkas) - The cloth with two points is made up of four equal horizontal bands: red, white, red, and white. The flag is drawn according to my personal observation in exposition "Napoleonas ir Lietuva" (Napoleon and Lithuania), National Museum of Lithuania, Vilnius.
Anon., 23 July 2003 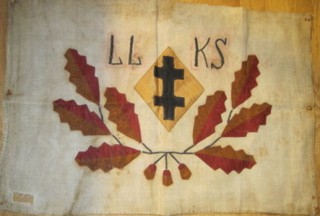 This flag was sold on Ebay during the past year. The seller could be Ilja Shapiro. I have bought another Forest brothers flag from the same seller a couple of years ago. It is a very strange, because nobody in the Lithuanian Forest Brothers Museum knows any information about these flags, standards and so on. Lithuania didn't have any original flag with symbols LLKS (Lietuvos Laisves Kovotoju Sajudis). These flags didn't appear in any Forest Brothers photos. It is a very strange, because one eBay guy during 3 years has found and sold 3 of them (the third he tried to sell this past month) My flag looks really old, and I do not have any arguments for telling that it is a fake... Maybe you have a more info about these type of flags?
Note: flags with lists of oak and symbols of LLKS have been used (if it isn't fakes!) only in 1949-1953 because this organisation (LLKS) was made in 1949.
Saulius Poderis, 14 December 2015

This flag would actually be the flag of the LLKS (Lietuvos laisvės kovos sđjūdis, Union of Lithuanian Freedom Fighters or Movement for the Struggle for Lithuanian Freedom in English). It was a resistance organization of the Lithuanian partisans, waging a guerrilla war against the Soviet Union after the occupation and even after the end of World War II. The organization was established on February 10, 1949, during a meeting of all partisan commanders in Minaičiai village. Jonas emaitis (codename Vytautas) was elected as the chairman of its presidium. On February 16, the 21st anniversary of the 1918 Act of Independence of Lithuania, the Union adopted a declaration proclaiming itself to be the supreme political and military authority in Lithuania. In 1996, after Lithuania regained independence in 1990, the Seimas (parliament) recognized the declaration as an official act of the Republic of Lithuania and emaitis as President of Lithuania. The organization and the partisan war were suppressed by the Soviet security agencies by 1953.
The flag features the Lithuanian partisans symbol.
The term "Forest Brothers" first came into use in the Baltic region (Estonia, Latvia, Lithuania) during the chaotic Russian Revolution of 1905. Varying sources refer to forest brothers of this era either as peasants revolting or as schoolteachers seeking refugee in the forest. Hence, the geographical location of the forrests in Lithuania, became proper ground to wage guerrilla warfare later during World War II and the occupation by Soviet and German forces according to the Molotov-Ribbentrop pact
Source: http://en.wikipedia.org/wiki/Forest_Brothers
The Forest Brothers were actually one of the many Lithuanian and Polish partisans (such as the "Cursed soldiers", Ŋoģnierze wyklęci in Polish) that fought in the Baltic Region.
Source: http://en.wikipedia.org/wiki/Lithuanian_partisans
Additional sources:
https://ru.wikipedia.org/wiki/Лесные_братья_(19401957)
http://en.wikipedia.org/wiki/Union_of_Lithuanian_Freedom_Fighters  ,
http://en.wikipedia.org/wiki/Lithuanian_partisans
http://en.wikipedia.org/wiki/Forest_Brothers
Esteban Rivera, 14 December 2015

I found this flag. Source: http://www.gzeme.lt/?s_id=1&n_id=7044
It bears the logo of the miko broliai or Forrest Brothers. Now: I don't know if this flag really existed, or if it's a reenactment group featuring its own flag or a veterans' association of former forrest brothers fighters, but to me it is most likely a reenactment group. Again, I don't know if the flag is vintage or if it's a modern creation to identify the group.
There's also this website, where you can find further information on this topic. It stands for: - Promoting the Lithuanian resistance movement during WWII and postwar years and its linking with (the city of) Ukmerge.
- Promoting and communicating Lithuanian resistance movement activities during WWII and postwar years.
- Participating in other organized historical battlefields.
- Communicating with other military history clubs exchanging information and experience.
- Allowing club members and sponsors a significant way to participate and gain interest during their leisure time.
Source: http://miskobroliai.weebly.com/apie-klub261.html
The above mentioned "club" (group) has its own Facebook page for additional information.
They feature original pictures of "forrest brothers" partisans.
Since the area of operations of these groups were the Baltic countries, they were also referred to as Metsavennad in Estonian and even had a group called Metsavendlus Eestis.
It is worth noticing that the armed resistance against Nazi occupation during WWII evolved and continued to be an armed resistance against Soviet occupation after WWII ended, by this group. Thus, this armed resistance movement known as "Forrest Brothers", is actually an amalgamation of several groups (by no means an umbrella organization, but rather a "term" to indicate armed resistance against a foreign occupation) in the Baltic countries (Estonia, Latvia and Lithuania) of combatants that fought for many years, even after WWII ended.
Esteban Rivera, 14 December 2015